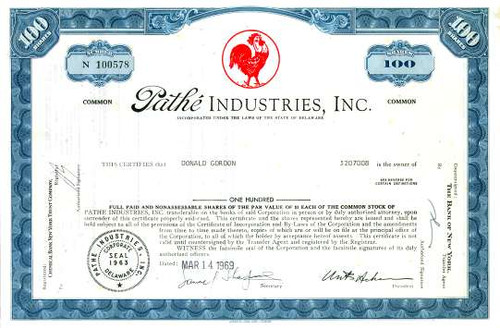 Beautifully engraved certificate from the Pathe Industries,Inc. issued in 1969. This historic document was printed by the American Banknote Company and has an ornate border around it with a vignette of a red rooster crowing. This item has the printed signatures of the company's president and secretary and is over 31 years old. PathÃ©'s history parallels that of the movie industry itself. After becoming captivated by the operation of a phonograph at a fair in 1894, Frenchman Charles PathÃ© opened his own phonograph shop. Expansion into kinetoscopes soon followed, and in 1896, Charles and his brother Emile established PathÃ© FrÃ¨res (PathÃ© Brothers), a pioneer in the film industry. PathÃ© FrÃ¨res dominated the burgeoning motion picture business after the turn of the century. The company improved on the studio camera, and by 1906 it was producing movies at the astonishing rate of one film per day and opened its first luxury cinema. The company originated the newsreel concept in 1908 and expanded into locations such as Italy, Japan, and Russia. PathÃ©'s serialized episodes of The Perils of Pauline made their way to a rapt audience of US moviegoers in 1914. PathÃ© moved its headquarters to the US during WWI; Europe would soon lose its leadership role in the film industry to Hollywood. Returning to France after the war, the PathÃ© brothers split their company, with Emile taking the phonograph operations and Charles concentrating on films. During the 1920s Charles PathÃ© partnered with entrepreneur Bernard Natan. Charles PathÃ© retired in 1929, and Natan eventually gained a controlling interest in the company. During the 1930s financial woes and Natan's conviction on embezzlement charges sent the company spiraling into bankruptcy. PathÃ© was resurrected in 1943 after its acquisition by Adrien Ramauge. Now operating as Societe Nouvelle PathÃ© Cinema, it returned to moviemaking with films such as Les Enfants du Paradis. The company began producing programming for the mushrooming TV industry, and film distribution became a key source of revenue for PathÃ© during the 1960s. By the end of the decade, French conglomerate the Rivaud Group owned a controlling interest in the company. During the 1970s theaters usurped film production as PathÃ©'s dominant revenue generator. A holding company headed by Italian financier Giancarlo Parretti bought 46.5% of the company in 1989. The French government thwarted its attempt to buy the rest of the company from the Rivaud Group, preferring that PathÃ© remain under French ownership. In 1990 Chargeurs, a French conglomerate led by JÃ©rÃ´me Seydoux, took control of the company. In 1996 Chargeurs split its operations into two public companies: textile and coating group Chargeurs and communications group PathÃ© SA, whose operations included its film and TV interests and theater chain, as well as Chargeurs' interests in pay TV operator British Sky Broadcasting (BSkyB) and CanalSatellite. JÃ©rÃ´me Seydoux became CEO of PathÃ© SA. The company bought a controlling interest in French newspaper LibÃ©ration in 1996, acquired the Voyage cable channel in 1997, and bought a controlling interest in AB Sport in 1998 (it acquired the remainder in 2000 and changed its name to PathÃ© Sport). PathÃ© SA bought a minority stake of French football club Olympique Lyonnais in 1999. Later that year, PathÃ© became a private company once again after French utility and communications giant Vivendi bought the company, retained its interests in BSkyB and CanalSatellite, and sold the rest of PathÃ© back to JÃ©rÃ´me Seydoux and his family (Fornier). Seydoux continued to operate the company under the PathÃ© name.