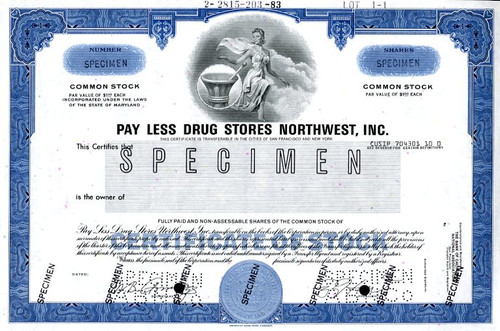 Beautiful engraved RARE specimen stock certificate from the Pay Less Drug Stores Northwest dated in 1983. This historic document was printed by American Bank Note Company and has a ornate border around it with a vignette of a women in clouds next to a mortar and pestle. This item has the printed signatures of the Company's President and Secretary and is over 36 years old. 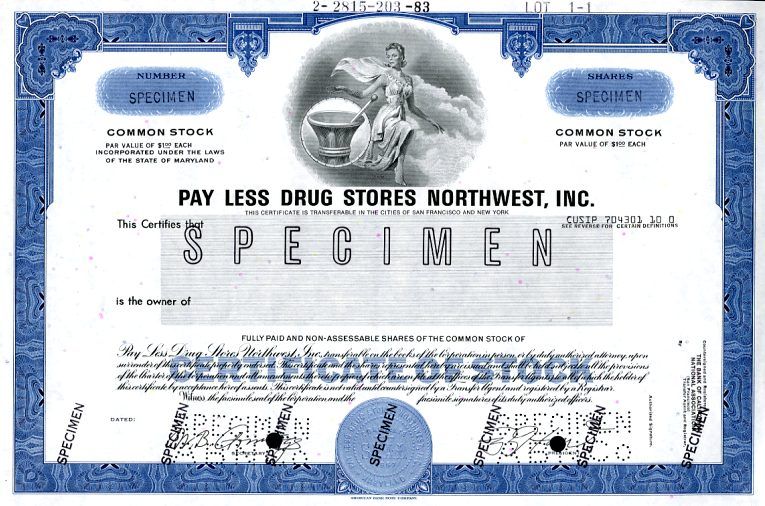 Certificate Vignette
Thrifty PayLess Holdings, Inc. was a pharmacy holding company that owned the Thrifty Drugs and PayLess Drug Store chains in the western United States. The combined company was formed when Los Angeles-based TCH Corporation, the parent company of Thrifty Corporation and Thrifty Drug Stores, Inc., acquired the Kmart subsidiary PayLess Drug Stores Northwest, Inc. At the time of the merger, TCH Corporation was renamed Thrifty PayLess Holdings, Inc. and Thrifty operated 495 stores, PayLess operated 543 stores. In 1996, Rite Aid acquired and the 1,000-store west coast chain's owner Thrifty PayLess Holdings re-branded it as Rite Aid, creating a chain with over 3,500 drug stores. Peyton Hawes and William Armitage acquired a controlling interest in five drug stores in three communities in Oregon and Washington, which were named PayLess, and grew their chain through both acquisition and internal expansion. It became a wholly owned unit of Kmart in 1985. In 1986, there were 225 PayLess stores. Between 1986 and 1988, it attempted a strategy of creating PayLess Wonder World stores in select Kmart, Value Giant, and former TG&Y locations, these stores lacked pharmacies, but included other sundries at discount prices. The Wonder World chain peaked at 16 stores, but were eventually reverted back to PayLess stores. Today, Payless Drugs is still in business as a long-term healthcare pharmacy but no longer operates retail stores. 1976 - PayLess bought 22 Value Giant stores, the majority of which were located in Northern California. 1980 - PayLess acquired PayLess Drug Stores of Oakland, California, founded by Levi Justin Skaggs. 1987 - PayLess purchased 25 Osco stores in Washington and Idaho. About Specimens Specimen Certificates are actual certificates that have never been issued. They were usually kept by the printers in their permanent archives as their only example of a particular certificate. Sometimes you will see a hand stamp on the certificate that says "Do not remove from file". Specimens were also used to show prospective clients different types of certificate designs that were available. Specimen certificates are usually much scarcer than issued certificates. In fact, many times they are the only way to get a certificate for a particular company because the issued certificates were redeemed and destroyed. In a few instances, Specimen certificates we made for a company but were never used because a different design was chosen by the company. These certificates are normally stamped "Specimen" or they have small holes spelling the word specimen. Most of the time they don't have a serial number, or they have a serial number of 00000. This is an exciting sector of the hobby that grown in popularity over the past several years.