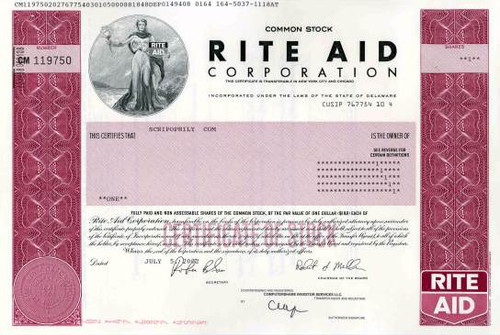 Beautifully engraved certificate from the Rite Aid Corporation. This historic document was printed by the Security-Columbian United States Banknote Corporation and has an ornate border around it with a vignette of an allegorical woman holding the company logo. This item has the printed signatures of the Company's Chairman of the Board and Secretary. 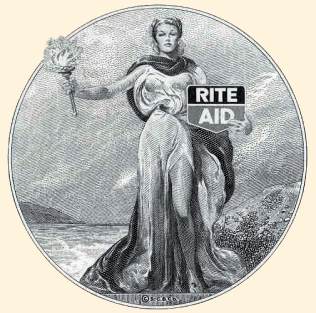 Certificate Vignette
Rite Aid Corporation is one of the nation's leading drugstore chains, combining its modern store base, strong brand name, modern distribution centers and superior pharmacy technology with a talented team of approximately 77,000 full and part-time associates serving customers in 30 states and the District of Columbia. Rite Aid currently operates more than 3,600 stores, reporting total sales of $14.491 billion at the end of its 2001 fiscal year. On June 24, 2002, the U.S. Attorney in Harrisburg, Pennsylvania, handed down a 37-count indictment against four former and current executives of drugstore chain Rite Aid--including former CFO Frank Bergonzi. The Securities and Exchange Commission simultaneously filed accounting fraud charges against Bergonzi and several other senior executives for what federal prosecutors called "a wide-ranging accounting fraud scheme that resulted in the largest earnings restatement ever." The "portrayal of Rite Aid as a profitable company was a ruse and a mirage," according to published citations from the indictment. "The deception was accomplished through massive accounting fraud, the deliberate falsification of its financial statements and intentionally false [Securities and Exchange Commission] filings." Modern Certificate Pricing Please note that if you buy a modern certificate from a discount or full service broker, it can cost you between $55 to $100 and that doesn't even include the cost of the stock. You will be charged for a commission and certificate issuance fee. Furthermore, if the company has been delisted and no longer traded, you will unable to get the certificate. Also, the modern certificates we offer have not been folded in thirds which is usually done if you order them directly from a broker. Lastly, the certificates are not issued in your name so if you frame the certificate and/or subsequently resell it as a collectible, the certificate won't have your personal information printed on its face.