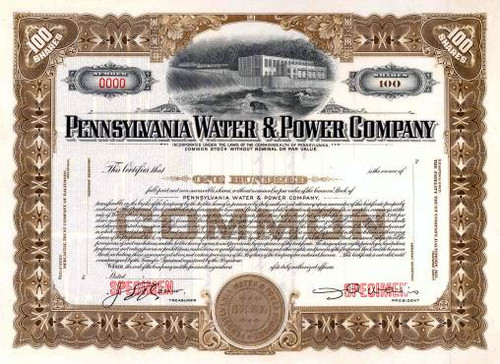 Beautifully engraved SPECIMEN certificate from the Pennsylvania Water & Power Company. This historic document was printed by the Republic Banknote Company and has an ornate border around it with a vignette of a dam. This item has the printed signatures of the Company's President and Treasurer.

Certificate Vignette
Pennsylvania Water & Power Co., became the only power plant in the world to combine a hydroelectric station and a fossil-fuel station on the same site in the 1920's. In the 1950s, Pennsylvania Power & Light purchased Pennsylvania Water & Power Co. and the Scranton Electric Co. John Abbet Walls earned his degree in engineering at the Massachusetts Institute of Technology. Following his graduation in 1899, he began working for the Niagara Falls Hydraulic Power and Manufacturing Company. He became Assistant Engineer of the Montreal Shawinigan Water and Power Company in Canada in 1901. Later, he was named Chief Engineer of the Pennsylvania Water and Power Company. As Chief Engineer, he designed, and directed the construction of one of the world's largest dams. He was later appointed president. By 1910, the lines at the McCalls Ferry Dam were transmitting electricity to Baltimore and many nearby cities. Following his work on the Safe Harbor Dam, which was opened in 1929, he was named President of the Safe Harbor Water Power Corporation. John Abbet Walls was awarded an Honorary Doctorate of Science by Bucknell University in 1931. About Specimen Stock and Bond Certificates Specimen Certificates are actual certificates that have never been issued. They were usually kept by the printers in their permanent archives as their only example of a particular certificate. Sometimes you will see a hand stamp on the certificate that says "Do not remove from file". Specimens were also used to show prospective clients different types of certificate designs that were available. Specimen certificates are usually much scarcer than issued certificates. In fact, many times they are the only way to get a certificate for a particular company because the issued certificates were redeemed and destroyed. In a few instances, Specimen certificates we made for a company but were never used because a different design was chosen by the company. These certificates are normally stamped "Specimen" or they have small holes spelling the word specimen. Most of the time they don't have a serial number, or they have a serial number of 00000. This is an exciting sector of the hobby that grown in popularity and realized nice appreciation in value over the past several years.