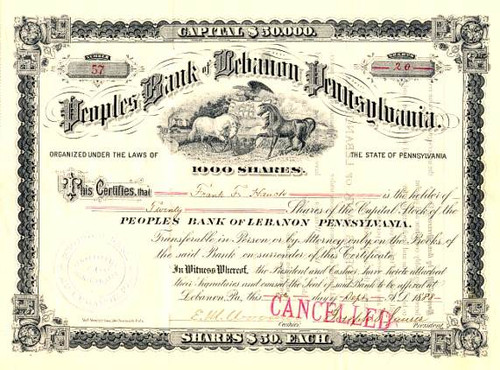 Beautifully engraved certificate from the Peoples Bank of Lebanon Pennsylvania issued in 1888. This historic document was printed by Wm. F. Murphy's Sons, Phila. and has an ornate border around it with a vignette of the Pennsylvania State Cost of Arms. This item has the signatures of the Company's President, Joseph S. Lauser and Cashier, Ephraim Milton Woomer and is over 117 years old.

Certificate Vignette
The Peoples Bank of Lebanon Pennsylvania was organized under the laws of the state of Pennsylvania on March 20, 1888. The bank had an initial capitalization of $50,000 which was raised to $100,000 in 1890. The Peoples Bank of Lebanon Pennsylvania became part of the Lebanon National Bank in 1894. Ephraim Milton Woomer, a Representative from Pennsylvania; born in Jonestown, Lebanon County, Pa., January 14, 1844; attended the common schools; during the Civil War enlisted in Company A, Ninety-third Regiment, Pennsylvania Volunteer Infantry, in September 1861; promoted to sergeant; taught school until 1869; engaged in mercantile pursuits; clerk of the orphans' court of Lebanon County 1869-1872; cashier of the People's Bank of Lebanon; member of the council of the borough of Lebanon 1884-1886; president of the select council of the city of Lebanon 1886-1890; delegate to the Republican National Convention in 1888; elected as a Republican to the Fifty-third and Fifty-fourth Congresses (March 4, 1893-March 3, 1897); unsuccessful candidate for renomination in 1896; again engaged in banking; died in Lebanon, Pa., November 29, 1897; interment in Mount Lebanon Cemetery. History from congressional biography.