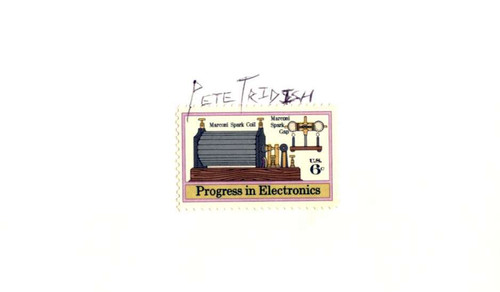 Pete Tridish's signature on a 3" x 5" card over 6 Cent U.S. Postage Stamp "Progress in Electronics" Pete Tridish (Pete Tri Dish; Pete TriDish) was "a member of the founding collective of Radio Mutiny, 91.3 FM in Philadelphia In 1996, He was an organizer for the station's demonstrations at Benjamin Franklin's Printing Press and the Liberty Bell; on both occasions the station broadcast in open defiance of the FCCs' unfair rules that prohibit low power community broadcasting. He was the organizer and speaker for the Radio Mutiny tour of 25 cities from January to March of 1998, and undertook another 20-city tour in February 1999 with the Prometheus Radio Project. "He was an organizer for the first two microradio conferences on the East Coast -- the first in Philadelphia in April 1998, and the second in Washington D.C. in October of the same year. At the October conference, there was also a demonstration at which radio pirates broadcast directly into the FCCs' main office. He actively participated in the rulemaking that led up to the adoption of LPFM. He sat on the committee that sponsored the crucial Broadcast Signal Labs study, which proved to the FCC that LPFM would not cause interference. "He has spoken at colleges, coffee shops, living rooms, and even the Cato Institute. He has been interviewed for several segments on NPR, a number of college, public and pirate radio stations, CNN, for Maximum Rock and Roll, Radio Ink, Radio and Records, Philadelphia City Paper, Baltimore City Paper, Albany Times Union, Philadelphia Inquirer, Freedom Forum, Chicago Tribune, LA Times, the Nation, Talkers Magazine, Washington Post, Broadcasting and Cable, Radio World, Hollywood Reporter, Z Magazine, Paper Tiger TV and other news outlets. "He holds a BA in Appropriate Technology from Antioch College." Source: Prometheus Radio Project.