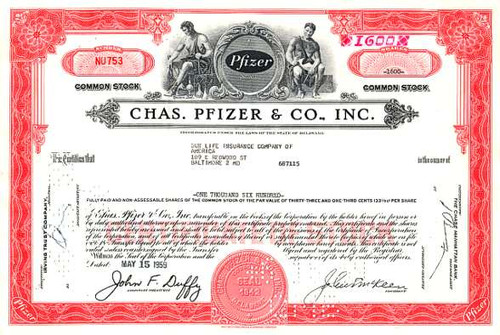 Beautifully engraved Certificate from the famous Pfizer - Chaz Pfizer & Co. - Scarce Red Color issued in 1959 - 1960. The red color certificate was issued for shares over 100 and is much more scarce than the other colors. This historic document was printed by the Security-Columbian Banknote Company and has an ornate border around it with a vignette of two allegorical men on both sides of the company's logo. This item has a printed signature of the Company's Chairman ( John McKeen ) and Secretary and is over 44 years old.