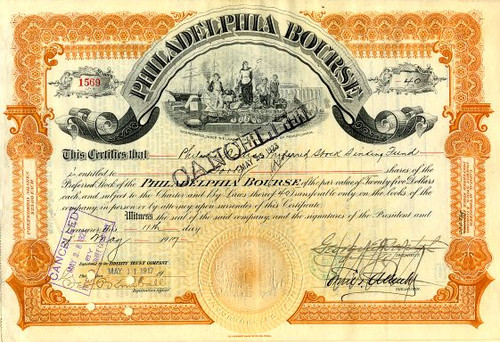 Beautiful certificate from the Philadelphia Bourse issued no later than 1918. This historic document was printed by E.A. Wright Company and has an ornate border around it with a vignette of a group of allegorical people next to a harbor. This item has the signatures of the Company's President, George Bartol and Treasurer and is over 90 years old. Pen cancelled.

Certificate Vignette
A Bourse is a stock exchange. The Philadelphia Bourse was the first in the world to house simultaneously a stock exchange, maritime exchange, and grain-trading center. Under the guidance of Philadelphia businessman George Bartol, the exchange thrived. However, as the business community moved westward in the city the sun started setting on the Bourse. In 1982, the Bourse was renovated to a combination shopping mall and office complex. The Philadelphia Bourse was brought to Philadelphia in 1890 by George E. Bartol, a prosperous Philadelphia grain and commodities exporter. While in Europe, Bartol visited the great Bourse in Hamburg, Germany. Upon his return to the United States, Bartol called together the most influential businessmen and merchants in the city, asking them to pool their resources to construct the city's own business center a Philadelphia Bourse. In 1891, The Philadelphia Bourse Corporation was formed, with each member subscribing $1,000 to the project, by an issue of stock and mortgage. The Bourse motto was "buy, sell, ship via Philadelphia". The Philadelphia Bourse Building, the first commodities exchange in the United States, was completed in 1895. The building was one of the first steel-framed buildings to be constructed. The original tenants included the American Telephone and Telegraphy, Moore and McCormick Steamships lines, grain dealers and export agents. The Bourse was also home to the Commercial Exchange, the Maritime Exchange, Grocers and Importers Exchange and the Board of Trade. Quotations from all markets of the world and the latest financial news were received by telegraph. Pneumatic tubes connected the Bourse directly with the United States Post Office. A trading clock signaled the end of every business day.