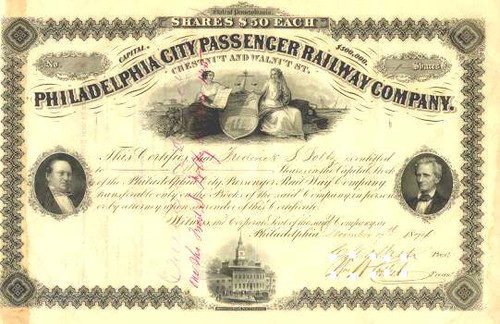 Beautifully engraved certificate from the Philadelphia City Passenger Railway Company issued in 1874. This historic document was printed by the American Banknote Company and has an ornate border around it with vignettes of two men, and two allegorical women sitting flanking a shield with a sailing vessel in the background and a vignette of Independence Hall. The document has period cancellations and a narrow vertical glue mark on the left side of the certificate from where it was attached back to the ledger when the certificate was redeemed. This item is hand signed by the company's president and treasurer and is over 126 years old. Independence Hall was erected between 1732 and 1753. The building, constructed in the Georgian style, was originally intended to be the State House for the colony of Pennsylvania. It was the meeting place (1775-1781) of the Continental Congress. General George Washington was appointed commander in chief of the Continental Army there in 1775. The Declaration of Independence was adopted in the east room of the building on July 4, 1776, and four days later the famous Liberty Bell, then in the tower of the hall, was rung to acclaim its adoption. In 1787 the U.S. Constitution was framed in Independence Hall by the Constitutional Convention. The hall was the seat of the U.S. Supreme Court from 1789 to 1800.