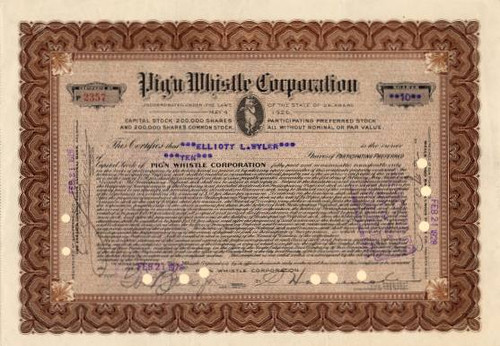 Beautifully engraved certificate from the Pig'n Whistle Corporation issued in 1928. This historic document has an ornate border around it with a vignette of the company's logo, a pig play a flute. This item is hand signed by the Company's President and Assistant Secretary and is over 76 years old. 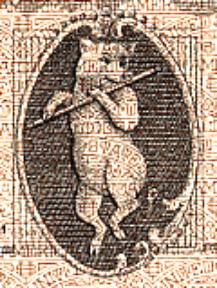 Certificate Vignette
In 1927, movie theatres didn't have concession counters inside their lobbies. A family restaurant and soda fountain opened up next door to the Egyptian Theatre, where movie-goers could have a meal before or after seeing the film was one of Hollywood's most renowned eateries - the world-famous Pig'n Whistle! The Pig'n Whistle opened its doors on July 22, 1927. Its stylish design, fanciful hand-carved wood dÃ©cor and traditional American fare made it an instant favorite with the movie colony as well as the local citizenry. Stars such as Shirley Temple, Spencer Tracy, Clark Gable and Loretta Young were regulars, enjoying the restaurant's wide range of menu items and soda fountain offerings. Connected to the forecourt of the Egyptian Theatre by a side entrance, The Pig'n Whistle quickly became the place for stars to gather after movie premieres and discuss the "industry" over cocktails. Household names like Cary Grant, Jane Wyman or Walter Pidgeon could often be spotted at The Pig'n Whistle having lunch and reading the trades or enjoying dinner, dressed to the nines after a glamorous evening at the Egyptian. The original Pig'n Whistle was part of a chain that extended along the Pacific Coast from Seattle to Los Angeles. Hollywood was one of twelve different locations - four in Downtown Los Angeles, one in Hollywood, one in Pasadena and others in San Francisco, Seattle and Portland. While most of the restaurants featured a simple design, the Hollywood setting called for something more elegant so renowned architects Morgan, Walls & Clements were enlisted to create a masterpiece. One of the most prominent firms in Los Angeles, Morgan, Walls & Clements (El Capitan Theatre, Wiltern Theatre, Globe Theatre), remodeled 6714 Hollywood Blvd., a former clothing store, into a place of "quiet dignity and resplendent luxury" (Hollywood Citizen-News, July, 1927). Highlighted by hand-painted decorative tiles (featuring The Pig'n Whistle logo of a dancing, flute-playing pig), elaborate carved wood ceilings and an ornate organ, the original restaurant featured a colorfully stenciled Italian Renaissance dining hall, a balcony for private parties and a baronial banquet room.