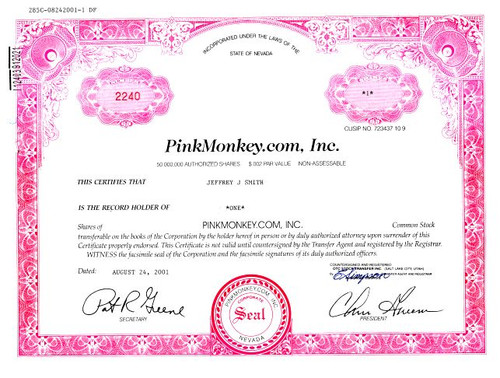 Beautiful certificate from PinkMonkey.com, Inc. issued in 2001. This historic document has an ornate border around it. This item has the printed signatures of the Company's President, and Secretary, and is over 10 years old. SEC v. PinkMonkey.com, Inc. and Patrick R. Greene (U.S. District Court, Southern District of Texas (Houston Division)) (SEC Contact: Spencer C. Barasch, 817-978-6425) The SEC alleges that PinkMonkey.com, Inc., an online publisher located in Houston, Texas, and Patrick R. Greene, its founder and controlling shareholder, issued a fraudulent press release that caused a 950% increase in the price of PinkMonkey's common stock. The release announced the "launch" of a new website service that could "quickly reach a significant market share in the $400+ million" study aids market; however, according to the SEC's complaint, the website was neither newly-launched nor likely to realize any significant market share. As of the date of the release, PinkMonkey had operated the website for 14 months and generated only $30 in sales. Furthermore, PinkMonkey and Greene actually anticipated needing one year to capture up to 5% of a market totaling only $160 million. Before the release, PinkMonkey's stock was thinly-traded, at a price of $1.50 or less. Within an hour after the release, PinkMonkey shares traded for as much as $4.375 per share, on heavy volume. The price peaked two days later at $17 per share, a more than 1000% increase from just two days earlier, before closing at $13.50 per share. At its zenith, PinkMonkey's market capitalization exceeded $200 million, although the company had only four full time employees and nominal sales. After PinkMonkey and Greene issued a clarifying press release, the company's stock price fell to $7.25 per share by the close of trading that day. PinkMonkey has never realized significant revenues, and its stock now trades for about $0.20 per share. Without admitting or denying the SEC's allegations, the defendants consented to the entry of permanent anti-fraud injunctions, and Greene has agreed to pay a $20,000 civil penalty. Stock research by OldCompany.com (old stock certificate research service).