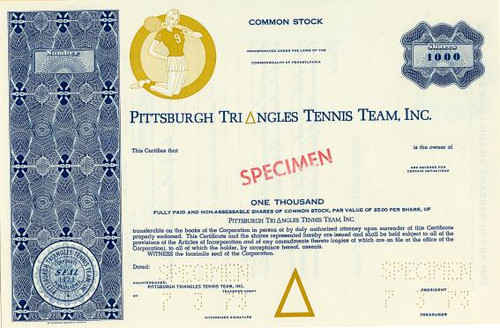 Beautiful engraved RARE specimen certificate from the Pittsburgh Triangles Tennis Team, Inc dated in 1973. This historic document was printed by Federated Banknote Company and has an ornate border around it with a vignette of a tennis player, dressed like a cheerleader with a racket on her shoulder. This classic certificate is over 34 years old. 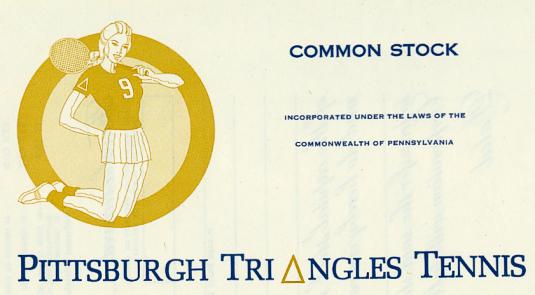 Certificate Vignette
The Pittsburgh Triangles of the short-lived World Team Tennis took the Association championship in 1975, their second year of play. The legendary Australian tennis star Ken Rosewall coached the original Pittsburgh Triangles team in 1974. Rosewall's top players were Evonne Goolagong, who had already captured her first Wimbledon singles title in 1971, and young phenom Vitas Gerulaitis. Vitas, nicknamed the Lithuanian Lion, had recently won the West Penn Open in Mt. Lebanon and would go on to win the 1975 Wimbledon men's doubles crown (with Sandy Mayer) and the 1977 Australian Open men's singles title. The original Triangles franchise was owned by 1972 Chuck Reichblum, Bill Sutton, and Fox Chapel businessman, sports promoter, and financier Frank Fuhrer, who eventually acquired a controlling interest in the Triangles. Other players drafted for the Triangles' inaugural season included Harold Solomon, Laura DuPont, Mona Schallau, Jeff Borowiak, Kathy Blake, Patrick DuPre, Jane Stratton, Tom Edlefsen, Gerald Battrick, Linda Lewis, Jill Cooper, Brian Teacher, Isabel Fernandez, Anand Amritraj, Paolo Bertolucci, Mary O'Keef, and Bob Chappell. During their first season the Triangles, clad in bright yellow and green uniforms, played in the WTT Eastern Division with teams from Philadelphia, Boston, New York, Baltimore, Detroit, Cleveland, and Toronto. WTT also had an eight team Western Division for a total of sixteen teams representing most of the major metropolitan areas in the United States. There was even a team from Hawaii called the Leis. At season's end the Triangles' record was 30 and 14, good enough for a playoff birth in the Central Section of the Eastern Division. In the first round they defeated Detroit in two straight matches 63-27 (31-10 and 32-17) but lost to Philadelphia in the semifinals 52-45 (31-21 and 21-24). History from Wikipedia and OldCompanyResearch.com. About Specimens Specimen Certificates are actual certificates that have never been issued. They were usually kept by the printers in their permanent archives as their only example of a particular certificate. Sometimes you will see a hand stamp on the certificate that says "Do not remove from file". Specimens were also used to show prospective clients different types of certificate designs that were available. Specimen certificates are usually much scarcer than issued certificates. In fact, many times they are the only way to get a certificate for a particular company because the issued certificates were redeemed and destroyed. In a few instances, Specimen certificates we made for a company but were never used because a different design was chosen by the company. These certificates are normally stamped "Specimen" or they have small holes spelling the word specimen. Most of the time they don't have a serial number, or they have a serial number of 00000. This is an exciting sector of the hobby that grown in popularity over the past several years.