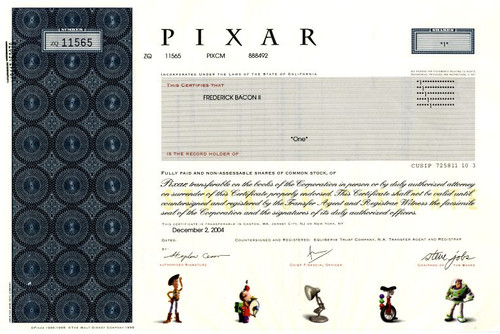 Beautifully engraved SCARCE certificate from the Pixar Animation Studios. This historic document was printed by the American Bank Note Company and has an ornate border with a vignettes the company's animation characters. This item has the printed signature of the Company's Chairman of the Board, Steve Jobs. The Disney deal closed on May 5, 2006. Pixar certificates are highly desirable and extremely hard to find.

Certificate Vignette
Pixar Animation Studios is an American CGI animation film studio based in Emeryville, California, United States. As of 2006, Pixar is a subsidiary of The Walt Disney Company. The studio has earned twenty-four Academy Awards, six Golden Globes, and three Grammys, among many other awards and acknowledgments. Its films have made over $6.3 billion worldwide. It is best known for its CGI-animated feature films which are created with PhotoRealistic RenderMan, its own implementation of the industry-standard RenderMan image-rendering API used to generate high-quality images. Pixar began in 1979 as the Graphics Group, part of the Computer Division of Lucasfilm before it was acquired by Apple co-founder Steve Jobs in 1986. The Walt Disney Company bought Pixar in 2006. Pixar has produced eleven feature films, beginning with Toy Story in 1995. It was followed by A Bug's Life in 1998, Toy Story 2 in 1999, Monsters, Inc. in 2001, Finding Nemo in 2003, The Incredibles in 2004, Cars in 2006, Ratatouille in 2007, WALL-E in 2008, Up in 2009 and Toy Story 3 (to date, the highest-grossing animated film of all-time, grossing over $1 billion worldwide), in 2010. All the eleven films that Pixar has produced have been largely successful, both critically and commercially. All the films produced by Pixar are among the fifty highest grossing animated films of all time. Finding Nemo, The Incredibles, Up and Toy Story 3 make it to the top 50 list of highest-grossing films of all time, with Toy Story 3 at #5, Finding Nemo at #21, Up at #37, and The Incredibles at #49. All seven Pixar films released since the inauguration of the Academy Award for Best Animated Feature in 2001 have been nominated for that award, commencing with Monsters, Inc.. Five of the seven have won the award: Finding Nemo, The Incredibles, Ratatouille, WALL-E, and Up. Up is also the first Pixar film and the second animated film in history (the only other being Beauty and the Beast) to be nominated for the Academy Award for Best Picture. On September 6, 2009, executives John Lasseter, Brad Bird, Pete Docter, Andrew Stanton and Lee Unkrich were presented with the Golden Lion for Lifetime Achievement by the Biennale Venice Film Festival. The award was presented by Lucasfilm founder George Lucas. Pixar's upcoming films include: Cars 2, (sequel to the 2006 film Cars), which is scheduled for release on June 24, 2011, Brave, which is scheduled for release on June 15, 2012 and Monsters, Inc. 2, (sequel to the 2001 film Monsters, Inc.) which is scheduled for release on November 2, 2012. History from Wikipedia and OldCompany.com (old stock certificate research service)