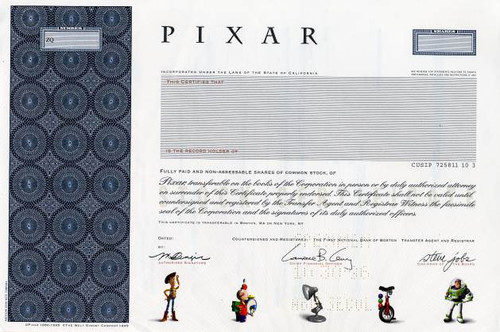 Beautifully engraved RARE IPO Specimen certificate from Pixar Animation Studios printed in 1995. This historic document was printed by the American Bank Note Company and has an ornate border around it with a vignette of the company logo between an allegorical man and woman. This item has the printed signature of the Company's Chairman of the Board, Steve Jobs. This is the first IPO specimen certificate we have seen from this famous company.

Certificate Vignette
Pixar's initial public offering was on November 29th 1995. Pixar common stock was initally priced at $22 per share. Pixar Animation Studios combines creative and technical artistry to create original stories in the medium of computer animation. In partnership with Disney, Pixar has created four of the most successful and beloved animated films of all time: Academy Award®-winning Toy Story (1995), A Bug's Life (1998), Golden Globe-winner Toy Story 2 (1999) and Monsters, Inc. (2001). Pixar's four films have earned more than $1.5 billion at the worldwide box office to date. The Northern California studio's next film, Finding Nemo, will be released in summer 2003. Pixar is located in Emeryville, California, and has over 600 employees. On January 24, 2006, Disney announced that it had agreed to buy Pixar for approximately $7.4 billion in an all-stock deal. Following Pixar shareholder approval, the acquisition was completed May 5, 2006. The transaction catapults Steve Jobs, who was the majority shareholder of Pixar with 50.1%, to Disney's largest individual shareholder with 7% and a new seat on its board of directors. Jobs' new Disney holdings outpace holdings belonging to ex-CEO Eisner, the previous top shareholder who still held 1.7%, and Disney Director Emeritus Roy E. Disney, whose criticisms of Eisner included the soured Pixar relationship and accelerated his ouster, who held almost 1% of the corporation's shares. As part of the deal, John Lasseter, Pixar Executive Vice President and founder, becomes Chief Creative Officer of the Disney and Pixar animation studios as well as the Principal Creative Adviser at Walt Disney Imagineering, which designs and builds the company's theme parks. Current Pixar President Ed Catmull becomes President of the Disney and Pixar animation studios, reporting to Robert Iger and Dick Cook, chairman of Walt Disney Studio Entertainment. Lasseter and Catmull's oversight of both the Disney and Pixar studios does not mean that the two studios are merging, however. In fact, additional conditions were laid out as part of the deal to ensure that Pixar remains a separate entity, a concern that many analysts had about the Disney deal: If Pixar pulled out of the deal, they would have been required to pay Disney a penalty of US$210 million. The Disney board will now include Steve Jobs. John Lasseter has the authority to approve films for both Disney and Pixar studios, with Disney CEO Robert Iger carrying final approving authority. The deal required that Pixar's primary directors and creative executives must also join the combined company. This includes Andrew Stanton, Pete Docter, Brad Bird, Bob Peterson, Brenda Chapman, Lee Unkrich, and Gary Rydstrom. There will be a steering committee that will oversee animation for both Disney and Pixar studios, with a mission to maintain and spread the Pixar culture. This committee will consist of Catmull, Lasseter, Jobs, Iger, Cook, and Tom Staggs. They will meet at Pixar headquarters at least once every two months. Pixar HR policies will remain intact, including the lack of employment contracts. Ensures the Pixar name will continue, and that the studio will remain in its current Emeryville, California location with the "Pixar" sign. Branding of films made post-merger will be "Disney Pixar". About Specimen Certificates Specimen Certificates are actual certificates that have never been issued. They were usually kept by the printers in their permanent archives as their only example of a particular certificate. Sometimes you will see a hand stamp on the certificate that says "Do not remove from file". Specimens were also used to show prospective clients different types of certificate designs that were available. Specimen certificates are usually much scarcer than issued certificates. In fact, many times they are the only way to get a certificate for a particular company because the issued certificates were redeemed and destroyed. In a few instances, Specimen certificates were made for a company but were never used because a different design was chosen by the company. These certificates are normally stamped "Specimen" or they have small holes spelling the word specimen. Most of the time they don't have a serial number, or they have a serial number of 00000. This is an exciting sector of the hobby that has grown in popularity over the past several years.