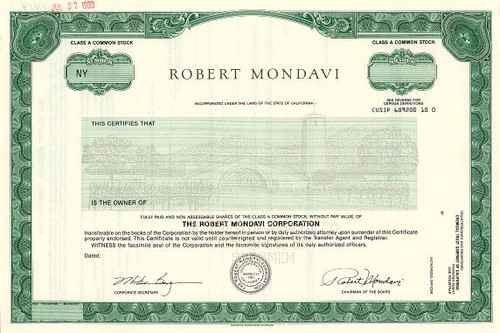 Beautiful engraved RARE specimen certificate from the Robert Mondavi printed in 1993. This historic document was printed by American Bank Note Company and has an ornate border around it witnh an uderprint of the winery. This item has the printed signatures of the Company's Chairman, Robert Mondavi and Secretary.

Certificate Underprint
On June 10, 1993, RMC issued 3.7 million shares at $13.50 a share and began trading on the NASDAQ exchange under the symbol MOND. The IPO raised approximately $49.95 million, giving the company a market capitalization of $213.3 million. On December 22, 2004, Robert Mondavi Corp. shareholders accepted a $1.3-billion cash buyout from drinks giant Constellation Brands. Robert Gerald Mondavi (born June 18, 1913 in Virginia, Minnesota, United States) is a leading vineyard operator whose technical improvements and marketing strategies brought worldwide recognition for the wines of the Napa Valley in California. From an early period, Mondavi aggressively promoted labeling wines varietally rather than generically. This is now the standard for New World wines and is favored by most consumers around the world. Where legally permitted, many Old World producers are increasingly labeling their wines varietally because of consumer demand. Robert Mondavi's parents emigrated from the Marche region of Italy and settled in the Minnesota city of Virginia, where he attended Hibbing High School. From Minnesota the Mondavi family moved to Lodi, California, where Cesare began a successful fruit packing business under the name C. Mondavi and Sons, packing and shipping grapes to the east coast primarily for home winemaking. Mondavi graduated from Stanford University in 1937 with a degree in economics and business administration. While at Stanford he was a member of the Phi Sigma Kappa fraternity. He joined his father Cesare and brother Peter after the family acquired the Charles Krug Winery from James Moffitt, established in 1861 in the Napa Valley. After a feud between himself and his younger brother Peter, Mondavi left Krug in 1965 to establish his own winery. He bought the To Kalon vineyard in Oakville, California in the Napa Valley. The winery bearing his name produced high quality wine in the California mission style. In 1966, with his elder son, R. Michael Mondavi, and family founded the Robert Mondavi Winery in the Napa Valley with the goal of producing wines that would rival the finest wines of Europe. In 1967, Robert's wife, Margrit Biever Mondavi, joined the winery. In 1968 he made a dry oak-aged Sauvignon Blanc, an unpopular variety in California at the time, and labelled it "FumÃ© Blanc." The wine was a success and, in time, FumÃ© Blanc became accepted as a synonym for Sauvignon Blanc. Mondavi successfully developed a number of premium wines that earned the respect of connoisseurs and vintners alike. In 1979, he built the Mondavi Woodbridge Winery in Lodi, California developing it into a leader of popular-premium wines. He also entered into a joint venture the Baron Philippe de Rothschild of ChÃ¢teau Mouton Rothschild to create Opus One Winery, and since the 1990s has set up joint ventures with local partners in Europe, South America and Australia. In the Grand European Jury Wine Tasting of 1997, the Robert Mondavi Chardonnay Reserve was ranked number one. History from Wikipedia and OldCompanyResearch.com. About Specimens Specimen Certificates are actual certificates that have never been issued. They were usually kept by the printers in their permanent archives as their only example of a particular certificate. Sometimes you will see a hand stamp on the certificate that says "Do not remove from file". Specimens were also used to show prospective clients different types of certificate designs that were available. Specimen certificates are usually much scarcer than issued certificates. In fact, many times they are the only way to get a certificate for a particular company because the issued certificates were redeemed and destroyed. In a few instances, Specimen certificates we made for a company but were never used because a different design was chosen by the company. These certificates are normally stamped "Specimen" or they have small holes spelling the word specimen. Most of the time they don't have a serial number, or they have a serial number of 00000. This is an exciting sector of the hobby that grown in popularity over the past several years.