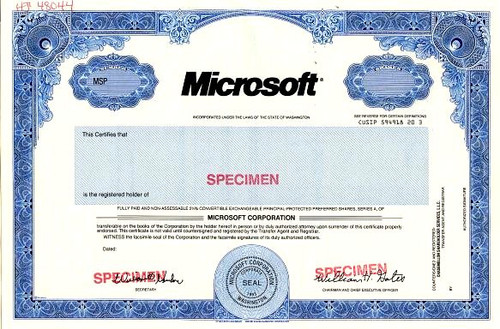 Beautiful engraved specimen stock certificate from Microsoft Corporation . This historic document was printed by Security - Columbian / United States Bank Note Company and has an ornate border around it with a vignette of the company name. This item has the printed signature of the Company's Chairman, William H. Gates. This is an earlier certificate that has Bill Gates printed signature on it which were pre stock splits. There are not many Microsoft specimen certificates we have seen with Bill Gates' name on it.

Certificate Vignette
Founded in 1975, Microsoft is the worldwide leader in software, services and Internet technologies for personal and business computing. The company offers a wide range of products and services designed to empower people through great software - any time, any place and on any device. William Henry Gates III (born October 28, 1955) is an American business magnate, software developer, investor, and philanthropist. He is best known as the co-founder of Microsoft Corporation. During his career at Microsoft, Gates held the positions of chairman, chief executive officer (CEO), president and chief software architect, while also being the largest individual shareholder until May 2014. He is one of the best-known entrepreneurs and pioneers of the microcomputer revolution of the 1970s and 1980s. Born and raised in Seattle, Washington, Gates co-founded Microsoft with childhood friend Paul Allen in 1975, in Albuquerque, New Mexico; it went on to become the world's largest personal computer software company. Gates led the company as chairman and CEO until stepping down as CEO in January 2000, but he remained chairman and became chief software architect. During the late 1990s, Gates had been criticized for his business tactics, which have been considered anti-competitive. This opinion has been upheld by numerous court rulings. In June 2006, Gates announced that he would be transitioning to a part-time role at Microsoft and full-time work at the Bill & Melinda Gates Foundation, the private charitable foundation that he and his wife, Melinda Gates, established in 2000. He gradually transferred his duties to Ray Ozzie and Craig Mundie. He stepped down as chairman of Microsoft in February 2014 and assumed a new post as technology adviser to support the newly appointed CEO Satya Nadella. Since 1987, he has been included in the Forbes list of the world's wealthiest people. From 1995 to 2017, he held the Forbes title of the richest person in the world all but four of those years.[1] In October 2017, he was surpassed by Amazon founder and CEO Jeff Bezos, who had an estimated net worth of US$90.6 billion compared to Gates' net worth of US$89.9 billion at the time. As of November 2019, Gates had an estimated net worth of US$107.1 billion, making him the second-wealthiest person in the world, behind Bezos. Later in his career and since leaving day-to-day operations at Microsoft in 2008, Gates pursued a number of philanthropic endeavors. He donated large amounts of money to various charitable organizations and scientific research programs through the Bill & Melinda Gates Foundation, reported to be the world's largest private charity. In 2009, Gates and Warren Buffett founded The Giving Pledge, whereby they and other billionaires pledge to give at least half of their wealth to philanthropy. The foundation says that it works to save lives and improve global health, and is working with Rotary International to eliminate polio. About Specimens Specimen Certificates are actual certificates that have never been issued. They were usually kept by the printers in their permanent archives as their only example of a particular certificate. Sometimes you will see a hand stamp on the certificate that says "Do not remove from file". Specimens were also used to show prospective clients different types of certificate designs that were available. Specimen certificates are usually much scarcer than issued certificates. In fact, many times they are the only way to get a certificate for a particular company because the issued certificates were redeemed and destroyed. In a few instances, Specimen certificates we made for a company but were never used because a different design was chosen by the company. These certificates are normally stamped "Specimen" or they have small holes spelling the word specimen. Most of the time they don't have a serial number, or they have a serial number of 00000. This is an exciting sector of the hobby that grown in popularity over the past several years.