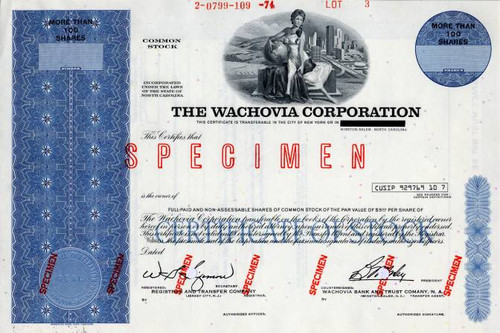 Beautiful specimen certificate from the Wachovia Corporation. This historic document was printed by the American Bank Note Company and has an ornate border around it with a vignette of an allegorical figure. This item has the printed signatures of the Company's President, and Secretary. 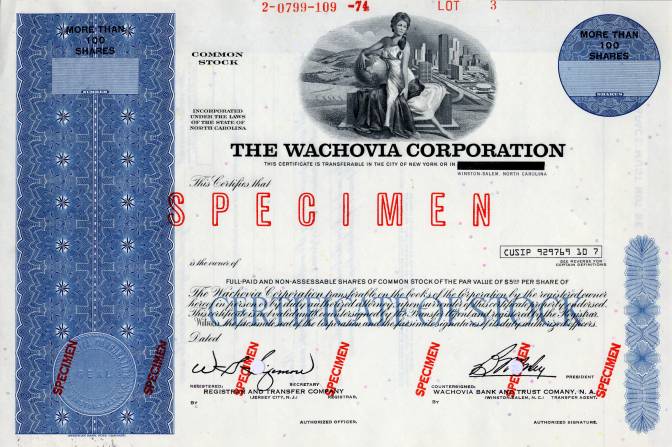 Certificate
Wachovia (former NYSE ticker symbol WB) was a diversified financial services company based in Charlotte, North Carolina. Before its acquisition by Wells Fargo in 2008, Wachovia was the fourth-largest bank holding company in the United States based on total assets. Wachovia provided a broad range of banking, asset management, wealth management, and corporate and investment banking products and services. At its height, it was one of the largest providers of financial services in the United States, operating financial centers in 21 states and Washington, D.C., with locations from Connecticut to Florida and west to California. Wachovia provided global services through more than 40 offices around the world. The purchase of Wachovia by Wells Fargo and Company was completed on December 31, 2008. Wells Fargo acquired Wachovia after a government-forced sale to avoid a failure of Wachovia. History from Wikipedia and OldCompany.com (old stock certificate research service) About Specimen Certificates Specimen Certificates are actual certificates that have never been issued. They were usually kept by the printers in their permanent archives as their only example of a particular certificate. Sometimes you will see a hand stamp on the certificate that says "Do not remove from file". Specimens were also used to show prospective clients different types of certificate designs that were available. Specimen certificates are usually much scarcer than issued certificates. In fact, many times they are the only way to get a certificate for a particular company because the issued certificates were redeemed and destroyed. In a few instances, Specimen certificates were made for a company but were never used because a different design was chosen by the company. These certificates are normally stamped "Specimen" or they have small holes spelling the word specimen. Most of the time they don't have a serial number, or they have a serial number of 00000. This is an exciting sector of the hobby that has grown in popularity over the past several years.