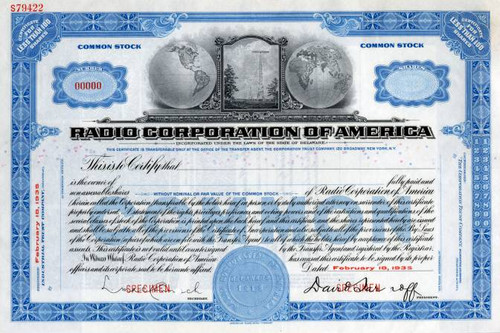 Beautifully engraved RARE SPECIMEN certificate from the Radio Corporation of America dated Fedruary 20, 1933. This historic document was printed by the American Banknote Company and has an ornate border around it with a vignette of two world globes on both side of towers . This item has the printed signatures of the Company's President ( David Sarnoff ) of the Board and Secretary ( Lewis MacConnach ). This is a RARE SPECIMEN. 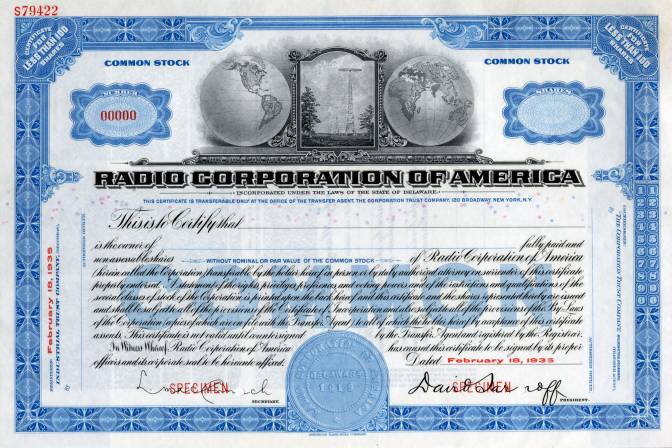 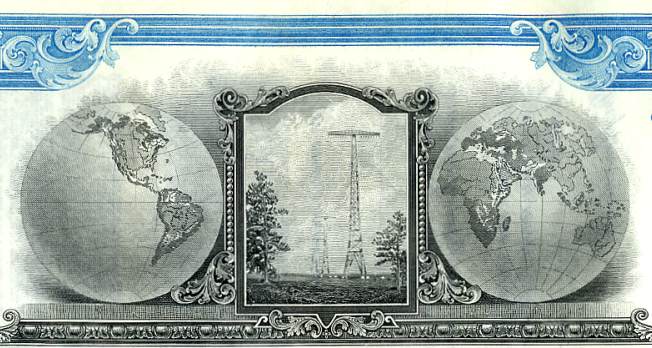 Certificate Vignette
The Radio Corporation of America (1919-1986) was organized as an American monopoly of radio technology by General Electric Company. After World War I, the United States Navy encouraged GE to buy the Marconi Wireless Telegraph Company of America from its parent company in England. Its assets included the country's only radio stations, hundreds of installations in ships, and David Sarnoff. David Sarnoff (1891-1971) was a corporate manager and executive and he became technology's champion, especially for broadcast communications, starting at the age of fifteen. He advocated, supported, financed, and oversaw the development of radio in the 1910s and 1920s, and then television from the 1930s through the 1950s. On April 14, 1912, Sarnoff was working at the Marconi station atop Wanamaker's department store when he picked up a message relayed from ships at sea: "S.S. Titanic ran into iceberg, sinking fast." For the next 72 hours, the story goes, he remained at his post, giving the world the first authentic news of the disaster. Sarnoff first posed the concept of broadcast radio in 1915. At that time, more than half of the American population lived in towns of less than 5,000 people; information arrived through newspapers, magazines, mail order catalogs, letters and postcards, and word of mouth. Today, there are nearly 13,000 AM and FM radio stations in the United States, and thousands more abroad, as well as nearly 20,000 internet radio stations. Sarnoff formally introduced RCA's electronic monochrome television system in 1939 and the world's first electronic color television system in 1946. In 2000 there were over 1,600 television stations in the United States. Only since 1990 have more households acquired complete plumbing facilities than televisions. Some 900 million people watch color TV around the world, and the color picture tube used for television and computer displays was invented at RCA Laboratories. David Sarnoff BORN Feb. 27, 1891, in Uzlian, Russia 1900 Immigrates to U.S. 1915 Proposes a "radio music box" to receive broadcasts 1921 Appointed RCA general manager; creates the first sports broadcast 1926 Creates NBC, the first radio network 1930 Named RCA president 1939 Introduces TV broadcasting to the U.S. 1947 Named CEO of RCA 1970 Retires from RCA 1971 Dies in New York History from StockResearch.pro (Professional Old Stock Certificate Research Service). About Specimen Certificates Specimen Certificates are actual certificates that have never been issued. They were usually kept by the printers in their permanent archives as their only example of a particular certificate. Sometimes you will see a hand stamp on the certificate that says "Do not remove from file". Specimens were also used to show prospective clients different types of certificate designs that were available. Specimen certificates are usually much scarcer than issued certificates. In fact, many times they are the only way to get a certificate for a particular company because the issued certificates were redeemed and destroyed. In a few instances, Specimen certificates we made for a company but were never used because a different design was chosen by the company. These certificates are normally stamped "Specimen" or they have small holes spelling the word specimen. Most of the time they don't have a serial number, or they have a serial number of 00000. This is an exciting sector of the hobby that grown in popularity and realized nice appreciation in value over the past several years.