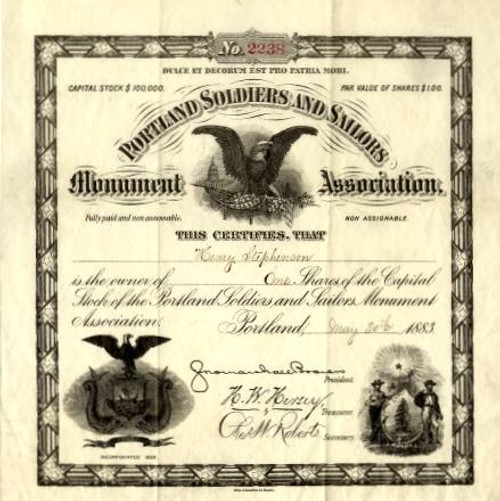 Beautifully engraved certificate from the Portland Soldiers and Sailors issued in 1883. This historic document was printed by John A. Lowell and has an ornate border around it with a vignette of eagle holding a flag with the Capitol in the background. This item has the printed signatures of the association's President, Treasurer and Secretary and is over 125 years old.

Certificate Vignette
The Portland Soldiers and Sailors Monument Association was formed in 1883 to raise funds to build a commemorative statue. The bronze statue they commissioned was designed by local sculpture Franklin Simmons. The pedestal was designed by Richard Hunt, a prominent New York architect. With the installation of this monument as Portland's Civil War Memorial, "Market Square" became "Monument Square." Today, the statue dominates a large triangular brick plaza which was enlarged and improved through the Maine Way urban renewal program. On the left side of the pedestal is a bronze casting of soldiers in Civil War uniform. On the right side of the pedestal is a bronze casting of sailors dressed in uniforms of the Civil War era.