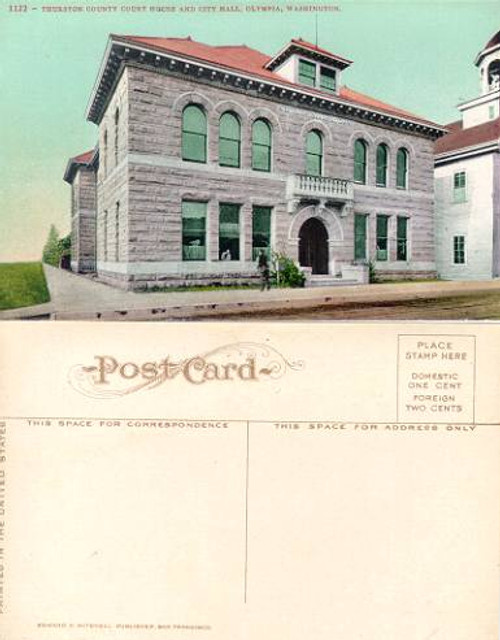 Beautifully printed postcard designed and published by Edward H. Mitchell, San Francisco, California around 1915. This beautiful postcard has an image of the Thurston County Court House and City Hall Olympia, Washington. This unused postcard item is over 85 years old. Located on the southernmost point of Puget Sound, the peninsula now known as Olympia was "the black bear place" to the Native Americans whose village had occupied the site for many generations before the first white settlement was established. Budd Inlet was a favorite meeting place where neighboring tribal groups gathered to celebrate festive occasions. Peter Puget, and a crew from the British Vancouver Expedition visited the site in 1792. The U.S. Exploring Expedition under Lt. Charles Wilkes came to the site in 1841 and named the waterfront bay Budd Inlet after Midshipman Thomas A. Budd, a member of that expedition. First American settlers were Levi Lathrop Smith and Edmund Sylvester who claimed the townsite in 1846. The town was officially platted in 1850 by Sylvester. The Maine native laid out a town in a New England style with a town square, tree lined streets, land for schools, a Masonic Hall and capitol grounds. The grand name of Olympia was selected by Isaac Ebey, a local resident, and reflected the view of the majestic Olympic mountains on a clear day. Drawn to the small peninsula as the first access to Puget Sound from the Columbia River on the Cowlitz Trail, American settlers numbered 996 in the area by 1853. Olympia could boast the first Custom House on Puget Sound in 1851 and by 1852 was the county seat for the newly organized Thurston County. When Washington Territory was formed in 1853, Olympia was named as the capital. This title of capital has been central to the town's history since that time. The town developed around the waterfront and quickly became a hub of maritime commerce. Federal officers and those seeking the opportunities of the capital flocked to the city which boasted at one time the largest population of any town on Puget Sound. Olympia's title of capital was often contested during the early years but townspeople fought challenges by Vancouver, Steilacoom, Seattle, Port Townsend and Tacoma for location of the seat of territorial and state government. An especially difficult blow fell when Olympia was bypassed by mainline railroads in the 1870s. City residents had to build their own line to connect with the Northern Pacific mainline at Tenino 15 miles to the south. State government was housed in a series of buildings in Olympia including the former county courthouse downtown. When Washington became a state in 1889 with Olympia as the capital, the city grew and prospered adding amenities such as an opera house, city water system, street car line, street lamps and a new hotel to accommodate visiting legislators. Changes were made in the topography of the city in 1911 - 1912, when almost 22 blocks were added in a gigantic dredging and filling effort to create a deep water harbor and fill the sloughs to the north and east of the city. A more reliable bridge to the west side made that area more accessible as well. With the increased growth in state government and the economic stimulus of World War I, the city grew rapidly. Olympia became a center of lumber processing and the city boasted as new smokestacks went up on the waterfront. Downtown buildings were constructed and residential areas south and west of the city developed. By the time of the completion of the grand domed legislative building in 1927, the city had become a fitting setting for such an imposing structure. A devastating earthquake in 1949 damaged or destroyed many historic downtown buildings. State government grew rapidly in Olympia after World War II, but by 1953 many state agency headquarters were being relocated to Seattle and other parts of the state. A group of local citizens brought suit, and a Washington Supreme Court decision that year mandated that Olympia was the seat of government and state office headquarters must locate here. By the 1960s state government was expanding and the Capitol Campus was growing as was employment in Olympia. In recent years, the city with its neighbors of Lacey and Tumwater have witnessed phenomenal growth. The small, muddy, bustling village of the 1850s is only a memory but the tenacious spirit of Olympians over more than a century echoes throughout the vibrant city of Olympia.