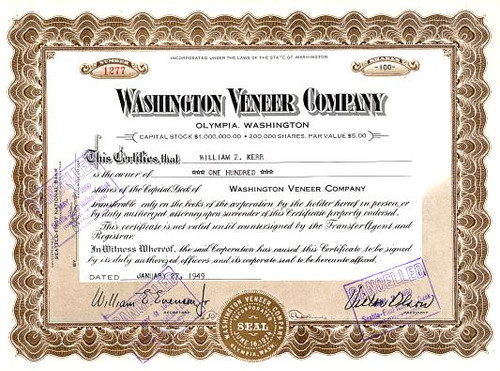 Beautiful certificate from the Washington Veneer Company issued in 1949. This historic document has an ornate border around it with the company's name on top center. This item has the signatures of the Company's President, Victor Olson and Secretary and is over 57 years old. Located in Olympia, Washington the Washington Veneer Company was a manufacturer of plywood and started operations in 1925 at the north end of Capitol Way. Founders were Ed Westman, Joseph L. Peters, C.J. Lord and Millard Lemon. The company grew rapidly, and in 1929 built a 225-foot-tall brick smokestack. Viewed as a symbol of economic prosperity, a couple was hoisted to the top and married in June 1929. Washington Veneer was sold to the Georgia-Pacific Lumber Co. in the late '40s. The plywood plant was closed in 1967.