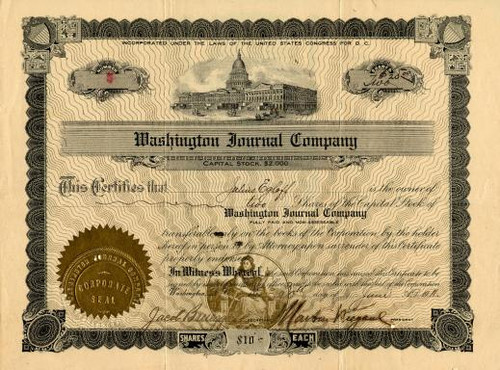 Beautifully engraved certificate from the Washington Journal Company issued in 1911. This historic document has an ornate border around it with a vignette of the U.S. Capitol. This item is hand signed by the Company's President, Martin Wiegand and Secretary, Jacob Brueggers and is over 94 years old. The certificate has been folded and shows some signs of wear.

Certificate Vignette
Founded in 1859, the Washington Journal is the oldest continuously published newspaper in Washington. For many years, its offices were located at 710 Sixth Street, NW, in the heart of the German-American business community downtown. The MCI center now covers the building-site. The newspaper's masthead gives the following list of publishers: Founder and publisher 1859-1911: Werner Koch Publisher 1915 to 1954: Hermann G. Winkler Publisher 1954-1967: Carl H. Winkler Publisher-Editor 1967-1999: Gerald R. Kainz In 1999, the new publisher, Peter G. Lobl, moved the paper's offices to Long Island City, NY. The editor is Katja Guttmann.