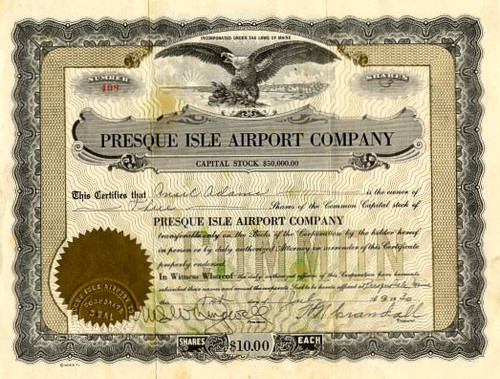 Beautiful certificate from the Presque Isle Airport Company issued in 1930. This historic document was printed by Goes Banknote Company and has an ornate border around it with a vignette of an eagle. This item has the signatures of the Company's President and Treasurer and is over 78 years old.

Certificate Vignette
The airport has served throughout the years as a civilian airport, a military airfield, a base for the world's first operational intercontinental cruise missile, and now as a civil airfield once again. Throughout its history, its military value was ensured due to its geographic position, as it was the most northern airport in the continental US when it was built. The Presque Isle airfield was originally built in 1930 by the Civilian Conservation Corps was described the "Presque Isle Airport" as a commercial airport, located 1.5 miles west of the "business center". The field was said to consist of a 250-acre L-shaped grass field, measuring 4,775' x 2,914', with two grass runways measuring 1,700' east/west & 1,000' north/south. The field was also said to have a 100' x 80' hangar, and the commercial operator was Northern Maine Airways. In 1941 the Federal Government purchased the airport to establish an air base for planes bound to & from Great Britain. Almost overnight, the Presque Isle base became a vital air transport installation. Together with Dow AAF in Bangor, they became America's two main ports of aerial embarkation over the North Atlantic. A commercial carrier, Northeast Airlines, was contracted during WW2 to run regular air service from Presque Isle to a large number of destinations in Canada, most of which were weather stations. Presque Isle was inactivated by the Army after WW2, but was then redesignated Presque Isle Air Force Base on January 13, 1948, and reactivated some time soon after that. For much of the 1950s, Presque Isle AFB housed fighters of the Air Defense Command. The 23rd Fighter Wing flew F-86 Sabres from Presque Isle as part of the Eastern Air Defense Force from 1951-1952. During 1951-1954, the 74th Fighter-Interceptor Squadron flew the F-86 & F-94 at Presque Isle. In the mid-1950s the 76th Fighter Interceptor Squadron was based at Presque Isle. The squadron continued to fly the F-86 until 1955 when it converted to the F-89. It continued operations out of Presque Isle until later moving to Dow Air Force Base, Maine. The 318th Fighter Interceptor Squadron flew the F-89D from Presque Isle from 1954-1955. In the next phase of its history, Presque Isle would become the very first base in the world for an intercontinental cruise missile, the Northrop SM-62 Snark. The key factor in SAC's decision to base the Snark at Presque Isle, was the base's location. Positioned at the very northeastern corner of the nation, Presque Isle brought the Snark within range of its anticipated targets in the Soviet Union. Following the deactivation of the Snark missile installation, the active Air Force Base at Presque Isle was closed, and Presque Isle AFB was subsequently redesignated Presque Isle Air National Guard Facility. Today, Presque Isle is used as a commercial airport, the Northern Maine Regional Airport. The airfield consists of two paved runways (the largest, 1/19, is the second longest commercial runway in Maine, at 7,400' long), and numerous ramps, taxiways & hangars. History from Wikipedia and OldCompanyResearch.com (old stock certificate research service).