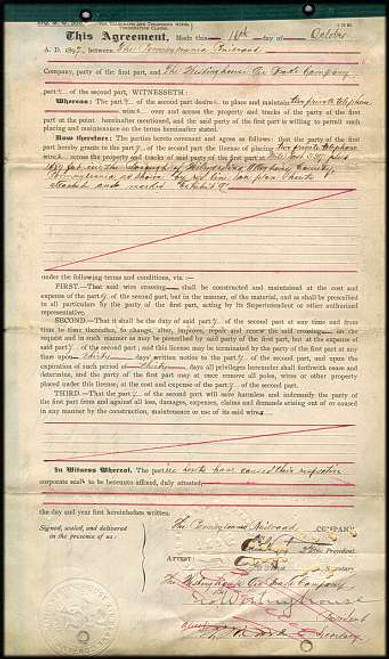 This agreement between The Westinghouse Air Brake Co. and The Penn RR. Co. is dated Oct. 16, 1897. For the purpose of placing two private telephone lines across land owned by the RR at the Westinghouse Plant in Wilmerding, Allegheny County Pennsylvania. The document measures 8&1/2" X 14" and has attached a blue print showing the property and proposed lines. This agreement is signed by George Westinghouse and is over 109 years old. GEO. WESTINGHOUSE.

George Westinghouse Signature
Westinghouse, George (1846-1914), American inventor, engineer, and industrialist. Westinghouse was born in Central Bridge, New York, and educated at what is now Union College and the University at Schenectady, New York. His first important invention, developed while he was employed in his father's factory in Schenectady, was a so-called railway frog, a device permitting trains to cross from one track to another. He devised his most famous invention, the air brake, about 1868. Although successfully demonstrated in 1868, the air brake did not become standard equipment until after the passage of the Railroad Safety Appliance Act in 1893. Westinghouse invented many other safety devices, especially for automatic railway signaling; developed a system for transporting natural gas; and acquired more than 400 patents, including many for alternating-current machinery. With Charles Steinmetz, he pioneered in the use of alternating-current power in the U.S. 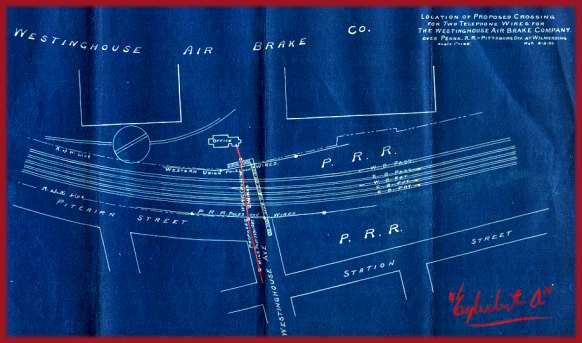