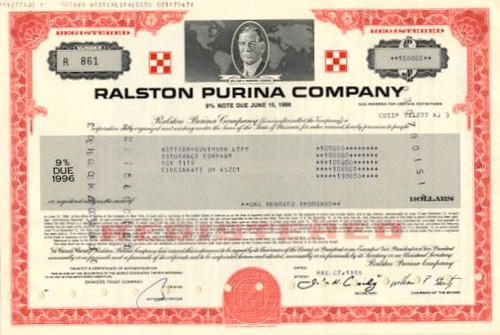 Beautifully engraved 9% Note certificate from the Ralston Purina Company issued in 1988. This historic document was printed by Security-Columbian Banknote and has an ornate border around it with a vignette of company founder, William H. Danforth. This item has printed signatures by the Company's Chairman of the Board and Secretary and is over 17 years old. 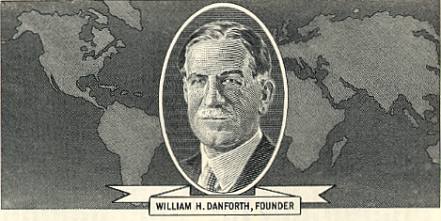 Certificate Vignette
Ralston Purina Company was founded in 1894 as the Robinson-Danforth Commission, a horse and mule feed business. Using $12,000 in borrowed capital, William H. Danforth, the Company's founder, began selling feed from a storefront on the banks of the Mississippi River in St. Louis, Mo., not far from where Ralston is headquartered today. In the early 1900s, Danforth began selling a whole-wheat breakfast cereal to St. Louis grocers under the Purina label. The word "Purina" had been coined from the Company slogan: "Where purity is paramount." The cereal was later renamed Ralston Wheat Cereal after receiving the endorsement of a well-known doctor of the day, Dr. Ralston. In 1902, the "Ralston" and "Purina" names were joined, and the Company was officially renamed. Ralston Purina's famous "checkerboard" logo was a marketing decision by Danforth, based on his childhood memories of a family in which the mother dressed all of her children in clothing made from the same bolt of cloth. One year, her choice of material was the checkerboard design, and Danforth never forgot the distinctive red-and-white pattern. During the formative years of the business, the emphasis was on agricultural animal feeds and hot breakfast cereals. It wasn't until the late 1920s that the first commercial pet food diet was developed by Ralston, giving birth to today's multi-billion-dollar pet food industry. Today, more than a century after its founding, Ralston Purina is the world's largest producer of dry dog and dry and soft-moist cat foods, which are marketed under the Purina® brand name; and a leading producer of cat box filler in the U.S. and Canada, marketed primarily under the Tidy Cats® brand name. The Company has approximately 22,000 employees and dozens of facilities worldwide. The history of the company was obtained from the Ralston Purina website.