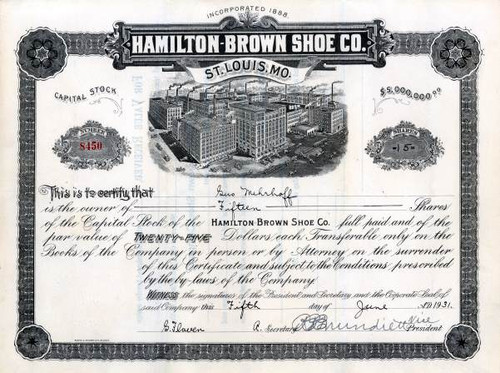 Beautifully engraved Scarce certificate from the Hamilton Brown Shoe Company issued no later than 1934. This historic document was printed by the American Banknote Company and has an ornate border around it with a vignette of the company's large manufacturing facility in St. Louis with horse drawn carts and electric trains passing. This item has the hand signatures of the Company's Vice President ( R. B. Brundrett ) and Secretary ( G. Flaven ).

Certificate Vignette
The company was a large manufacturer of mens, womens's and children's shoes. In 1888, the Hamilton-Brown Shoe Company built a factory at the northeast corner of 21st and Locust in a fading upper-class residential neighborhood in St. Louis. Already a force in St. Louis industry, the company doubled its sales between 1890 and 1900. By the early 20th century, Hamilton-Brown with six manufacturing facilities claimed world leadership in boots and shoes. At one time, the company was the largest shoe manufacturer in the world. Their product line brand included the "American Gentleman" and "American Lady".