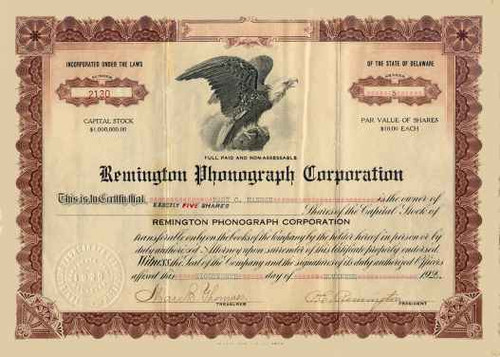 Beautifully engraved certificate from the Remington Phonograph Corporation issued in 1920. This historic document was printed by the Security Banknote Company and has an ornate border around it with a vignette of an eagle perched upon a rock with its wings spread out. This item is hand signed by the company's president, Philo E. Remington and its treasurer. This certificate is over 84 years old. Philo E. Remington was the grandson of the founder of the Remington firearms and typewriter companies. The Remington Phonograph Corporation was located at 1662 Broadway, New York City, New York in June 1920. A Trademark was filed on 7/20/1920 for the company name. The Remington Phonograph Corporation failed in December 1921. Philo Remington attempted to reorganize as the Remington Radio Corporation in 1922 but suspended operations after being indicted for stock fraud. The company owned Olympic Disc Record Corporation which was formed in March 1921. Olympic recorded its own masters in popular vocal, dance music, Hawaiian, standard and light classical, miscellaneous instrumental, religious, and the spoken word. Although marketed as a premium-priced label, Olympic offered primarily bland pop and light classical fare by the usual studio freelancers. A short-lived operatic series, with plot synopses printed on the labels, featured such lesser lights as Regina Viccarino and Henrietta Wakefield. Technical quality was mediocre at best, and with few stars on its roster, Olympic could not compete with Columbia, Victor, and other comparably priced labels. The last records released under the Olympic Disc Record Corporation imprint appeared shortly before the parent Remington Phonograph Corporation failed in December 1921. In April of 1922, Black Swan Records purchased the bankrupt Remington Phonograph Corp. and their recording and pressing plant in Long Island City. With this increased capacity, the production of Black Swan Records was increased to more than 6,000 records daily. In December of 1923, Black Swan Records declared bankruptcy and in May of 1924 Paramount announce a deal to lease the Black Swam catalog. Black Swan Records was history.