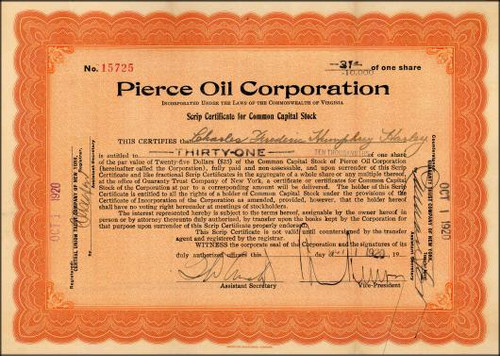 Beautifully engraved certificate from the Pierce Oil Corporation issued in 1920. This historic document was printed by the American Banknote Company and has an ornate border around it. This item is hand signed by the Company's Vice President and Assistant Secretary and is over 82 years old. The company was the successor to the Waters Pierce Oil Company which began in 1855. In 1924, the company became the Pierce Petroleum Company. In 1911, the Standard Oil Trust was broken up. Among the company assets that were divided up was the right to use the well-known 'Standard' brand name. Most of these "Baby Standards" kept using the popular "Red Crown" and "White Crown" gasoline brands, as well as "Polarine" Motor Oil. Waters-Pierce was awarded southern Missouri, western Louisiana, Arkansas, Oklahoma, and Texas The company went out of business in 1940 and was acquired by Sinclair Oil. The rights to use Standard name in its territories were divided between Indiana Standard, Esso, and Socal.