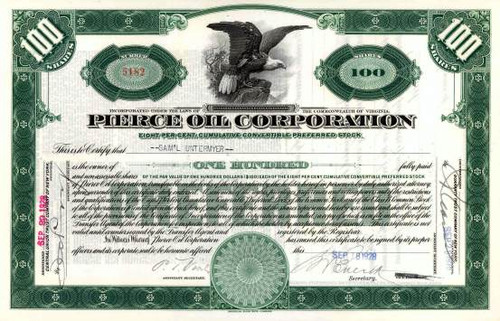 Beautifully engraved certificate from the Pierce Oil Corporation issued in 1928. This historic document was printed by the American Banknote Company and has an ornate border around it with a vignette of an eagle. This item is hand signed by the Company's Secretary and Assistant Secretary and is over 77 years old. The certificate was issued to Samuel Untermyer. 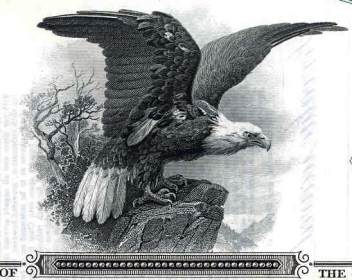 Certificate Vignette
The company was the successor to the Waters Pierce Oil Company which began in 1855. In 1924, the company became the Pierce Petroleum Company. Later the company became the Pierce Oil Corporation. In 1911, the Standard Oil Trust was broken up. Among the company assets that were divided up was the right to use the well-known 'Standard' brand name. Most of these "Baby Standards" kept using the popular "Red Crown" and "White Crown" gasoline brands, as well as "Polarine" Motor Oil. Waters-Pierce was awarded southern Missouri, Western Louisiana, Arkansas, Oklahoma, and Texas The company was acquired by Sinclair Oil in 1940. Untermyer, Samuel, 18581940, American lawyer and civic leader, b. Lynchburg, Va., grad. Columbia law school, 1878. He gained fame as a lawyer and took part in some of the country's most important litigation. He served as counsel to the congressional committee headed by ArsÃ¨ne Pujo that investigated (1912) money trusts, and to the Lockwood committee of the New York legislature, which probed (192122) statewide housing conditions. As special counsel until 1933 in the famous New York City transit suits, he helped maintain the five-cent subway fare. Untermyer was a staunch advocate of stock-market regulations, government ownership of railroads, and various legal reforms. A leading crusader against anti-Semitism, Untermyer was active in the movement to boycott Germany after Hitler rose to power.