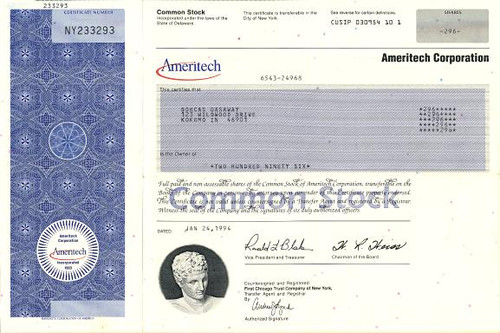 Beautiful certificate from the Ameritech Corporation issued in 1994. This historic document was printed by Banknote Corporation of America and has an ornate border around it with a vignette of a portrait of a man. This item has the signatures of the Company's Chairman and Vice-President and Treasurer and is over 14 years old. 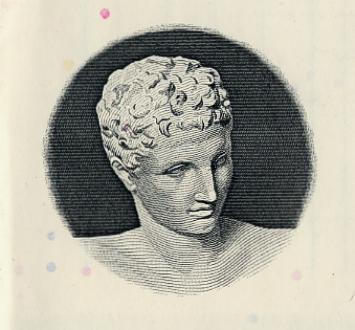 Certificate Vignette
Ameritech Corporation (originally American Information Technologies Corporation) was a U.S. telecommunications company that arose out of the 1984 AT&T divestiture. Ameritech was one of seven Regional Bell Operating Companies divested. Ameritech was created as a holding company; under its umbrella were: Illinois Bell Telephone Company Indiana Bell Telephone Company, Inc. Michigan Bell Telephone Company The Ohio Bell Telephone Company Wisconsin Bell, Inc. For Ameritech's first nine years, it maintained these Bell brands inherited from the Bell System -- though public displays of the Bell companies' names were often captioned "An Ameritech Company". In January 1993, Ameritech officially retired the Bell brands and marketed itself with solely the Ameritech name across all five states in its territory. It added "d/b/a Ameritech (state)" to the names of its Bells to communicate brand unity. Ameritech also owned Ameritech Cellular, a wireless company that operated cellular networks in many of the major cities of these states. Ameritech Cellular was previously called Ameritech Mobile Communications. Prior to its merger with SBC Communications, Ameritech's corporate headquarters were in a leased space above the Chicago Mercantile Exchange on floors 34 through 39 of 30 S Wacker Dr, Chicago IL. Further corporate offices were located at 225 W Randolph St, Chicago IL (formerly "The Illinois Bell Building") and 1 Ameritech Center Dr, Hoffman Estates IL ("The Ameritech Center"). It was traded on the NYSE under the "AIT" symbol. History from Wikipedia and OldCompanyResearch.com (old stock certificate research service).