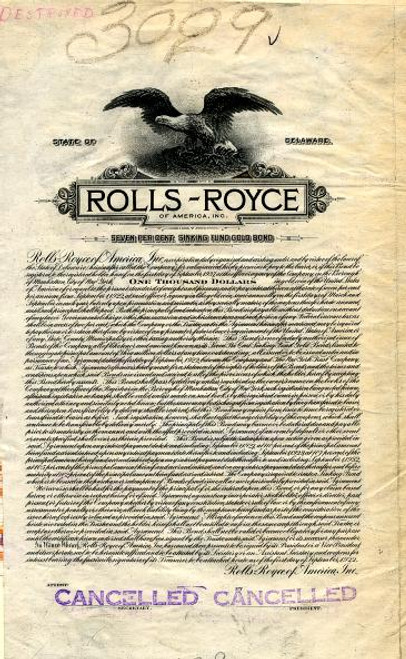 Beautiful RARE Specimen Proof Certificate from the Rolls Royce of America dated in 1922. The front proof has eagle vignette on top with title, text, coupons on the right and no border. The back has the bond back with back coupons printed in orange. Purple cancelled stamps are on the front and back. Plate numbers are written on top of the front proof as well as ""Destroyed"" referring to the plate. Fine condition with folds, soiling and handling. RBNC. No other example was found in the American Banknote archives as either proof or specimen. Unique. 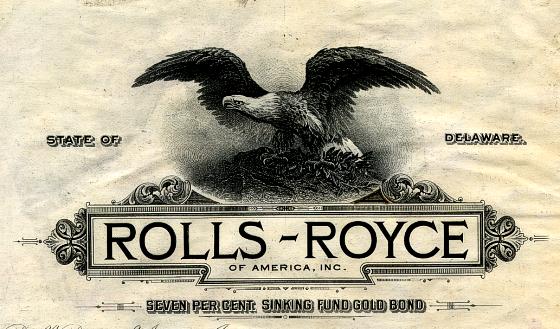 Certificate Vignette
Rolls-Royce of America Inc. was formed by Rolls-Royce to meet the massive and growing U.S. car market by building a plant in Springfield, Massachusetts. Their first chassis was completed in 1921. Time Magazine - Monday, Apr. 02, 1934 Rolls-Royce of England, parent of Rolls-Royce of America, Inc., was founded in 1903 by the son of a miller. As a boy, Hon. Charles Stuart Rolls, son of Lord Llangattock, precociously demonstrated his electrical ability by rigging up an apparatus in his mother's bedroom so that the moment she sat in her favorite armchair the room would burst into light. Plump Lady Llangattock sat down so hard she squashed the switch, blew out a fuse. Partner Frederick Henry Royce, struggling against youthful poverty, had no time for pranks. A modest builder of electrical cranes in Manchester, he had just gone to bed in a cheap London hotel one night in 1903 when Mr. Rolls burst in and introduced himself as a salesman of French cars. Each was passionately fond of engineering, each dreamed of building the finest car in the world. Then & there began a famed partnership which lasted until 1910 when Charles Rolls crashed to death in an airplane. Rolls-Royce of America, Inc., founded nine years later with U. S. capital, and British control, began producing cars in 1921. Even before Depression, the makers found that many a well-to-do U. S. businessman, financially able to own a Rolls, hesitated to buy one for fear of appearing unduly swanky in so luxurious a car (average price: $18,000). Rolls-Royce hastened to blast away this sales resistance with advertisements boldly captioned: To the Man Who is Afraid to Let His Dreams Come True. But during Depression the number of such fearful men grew so great that Rolls-Royce sales since 1931 fell off over 50% to $926,000. Last week, after four years of Depression deficits, Rolls-Royce hit upon a brand new idea. President John S. Inskip put on display in Manhattan a hybrid 'luxury" car, the Brewster "Cabriolet de Ville," with which he hoped to develop a new market. It had a Brewster body, a Ford chassis, a Ford V-8 engine. Price: $3,500. President Inskip had wangled a contract out of Henry Ford to supply engines and chassis in bulk. At the Springfield, Mass. plant of Brewster & Co. Inc., onetime famed carriage makers, now wholly owned by Rolls-Royce, the chassis were to be lengthened and partly reshaped to fit Brewster bodies. Solid, expensive-looking, it is cheap enough to appeal to a certain type of Depression pocketbook, modish enough to suit a rich man's tastes. The sponsor of Rolls-Royce's latest innovation was almost the first man Rolls-Royce of America ever hired. John Swanel Inskip began selling Rolls-Royces in 1922. Grey-haired, affable, popular, he was elected president in 1929 just before the lean Rolls' years began. Best Rolls' year was 1926 when the net profit was $524,000. Poorest was 1931, when its deficit reached $745,000. No dividend has ever been paid on the common stock (controlled by Rolls-Royce, Ltd. of England), whereas unpaid cumulative dividends on the preferred now total $78.75 per share. Last week there was no Brewster in Brewster & Co. to be proud of Mr. Inskip's new product. The founder died at the height of his fame as a carriage maker 19 years before Mr. Inskip was born, 38 years before England ever heard of a Rolls-Royce. James Brewster, descendant of William Brewster, Mayflower Pilgrim, was a wagonmaker's apprentice at 16. He moved from Northampton, Mass. to New Haven, began making "Brewster wagons'' in his own shop. When they became famed, he branched out into buggies, phaetons, victorias, coaches. Many were painted green--the Brewster green used by modern paint companies. Brewster carriage makers always got good pay, provided they drank no liquor. Top price for a Brewster carriage was $1,450 and Brewster carriages were in the stables of every Vanderbilt, Astor. Auchincloss and Gould. After James Brewster died in 1866 his son Henry carried on the business, branched into automobile bodies in 1907, aviation equipment during the War. The company's century-old reputation for workmanship was undimmed when Rolls-Royce, casting about for a body as good as its chassis, bought Brewster & Co. in 1925.