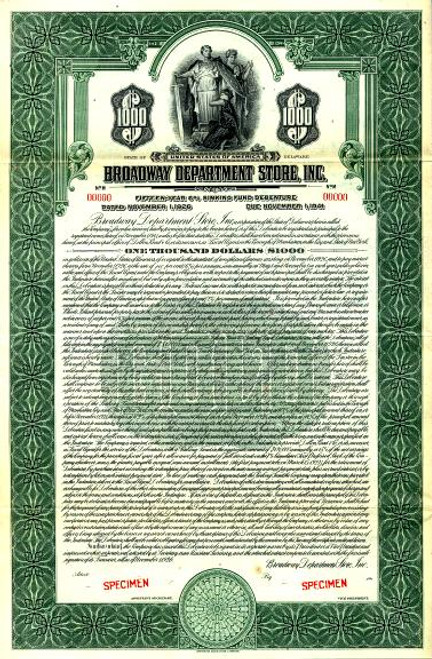 Beautiful engraved $1000 Gold Bond Specimen Certificate from the Broadway Department Store, Inc dated in 1926. This historic document was printed by American Bank Note Company and has an ornate border around it with a vignette of a group of allegorical people. This item 90 years old and would look terrific framed. Wear on upper fold. 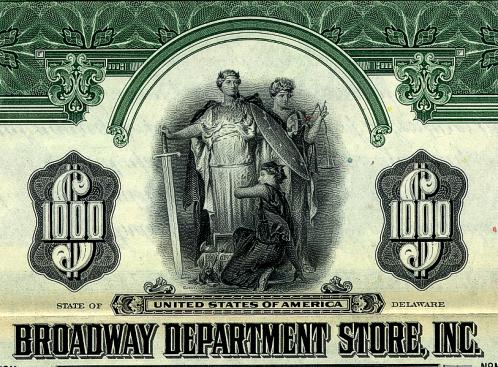 Certificate Vignette
The Broadway was a mid-level department store chain headquartered in Los Angeles, California. Founded in 1896 by English born Arthur Letts, Sr., who later went on to develop Holmby Hills, The Broadway became one of the dominant retailers in Southern California and the Southwest. In 1950, the company merged with Sacramento-based Hale Brothers to form Broadway-Hale Stores. The Broadway bought out competitors in Los Angeles (B.H. Dyas, Milliron's, and Coulter's), San Diego (Marston's), and Phoenix (Korrick's). In later years The Broadway opened stores in Nevada (Las Vegas), New Mexico, and Colorado. In 1979, it was split into two divisions: The Broadway Southern California, based in Los Angeles; and Broadway Southwest, headquartered in Phoenix (for the non-California stores). The Broadway's parent Carter Hawley Hale Stores ran into financial difficulties which resulted from poor management decisions and hostile takeover attempts. In 1996 the chain was acquired by Federated Department Stores and the majority of locations were converted to the Macy's nameplate. Several stores in affluent areas where Macy's already had locations were closed, refurbished and reopened as Bloomingdale's, while Federated sold many of the remaining stores to Sears. History from Wikipedia and OldCompany.com (old stock certificate research service). About Specimens Specimen Certificates are actual certificates that have never been issued. They were usually kept by the printers in their permanent archives as their only example of a particular certificate. Sometimes you will see a hand stamp on the certificate that says "Do not remove from file". Specimens were also used to show prospective clients different types of certificate designs that were available. Specimen certificates are usually much scarcer than issued certificates. In fact, many times they are the only way to get a certificate for a particular company because the issued certificates were redeemed and destroyed. In a few instances, Specimen certificates we made for a company but were never used because a different design was chosen by the company. These certificates are normally stamped "Specimen" or they have small holes spelling the word specimen. Most of the time they don't have a serial number, or they have a serial number of 00000. This is an exciting sector of the hobby that grown in popularity over the past several years.