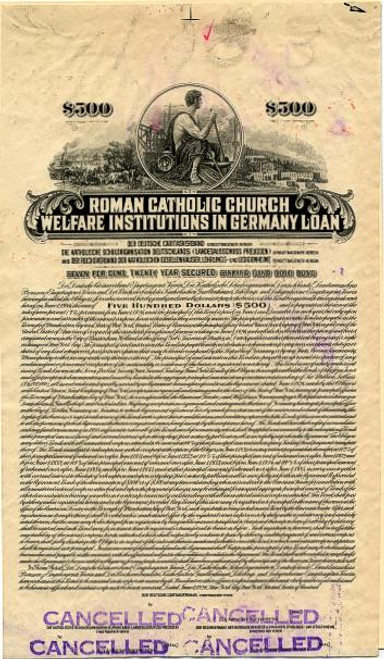 Beautiful RARE Specimen Proof certificate from the Roman Catholic Church Welfare Institutions in Germany Loan printed in 1926. This historic document and has an ornate border around it with a vignette of an allegorical man, cows in a pasture, and several large buildings. This item and is over 81 years old.

Certificate Vignette
Reported in Time Magazine on Monday, Mar. 05, 1928: Church bond issues are fairly common. Wall Street knows well the 1st mortgage issue of the Holy Sisters of the Precious Blood. The New York market has recently distributed a Roman Catholic Church in Bavaria loan ($5,000,000), a Roman Catholic Welfare Institution in Germany issue ($3,000,000), and a Protestant Church in Germany Welfare Institutions issue ($2,500,000). The two last named bond issues were offered to the public within a few days of each other, both by Protestant bankers. The house selling the Catholic bonds published in its formal advertisement that 36% of the inhabitants of the German Reich were Roman Catholics. The house offering the Protestant bonds asserted in its newspaper reproduction of the bond circular that "more than two-thirds" of the German population was Protestant. A prominent Jewish banker who is widely known as one of the first wits of Wall Street calculated the total and remarked at a Bankers Club luncheon: "The problem of German Jewry is solved. We represent minus 3% of the population of the Fatherland." About Specimen Certificates Specimen Certificates are actual certificates that have never been issued. They were usually kept by the printers in their permanent archives as their only example of a particular certificate. Sometimes you will see a hand stamp on the certificate that says "Do not remove from file". Specimens were also used to show prospective clients different types of certificate designs that were available. Specimen certificates are usually much scarcer than issued certificates. In fact, many times they are the only way to get a certificate for a particular company because the issued certificates were redeemed and destroyed. In a few instances, Specimen certificates were made for a company but were never used because a different design was chosen by the company. These certificates are normally stamped "Specimen" or they have small holes spelling the word specimen. Most of the time they don't have a serial number, or they have a serial number of 00000. This is an exciting sector of the hobby that has grown in popularity over the past several years.