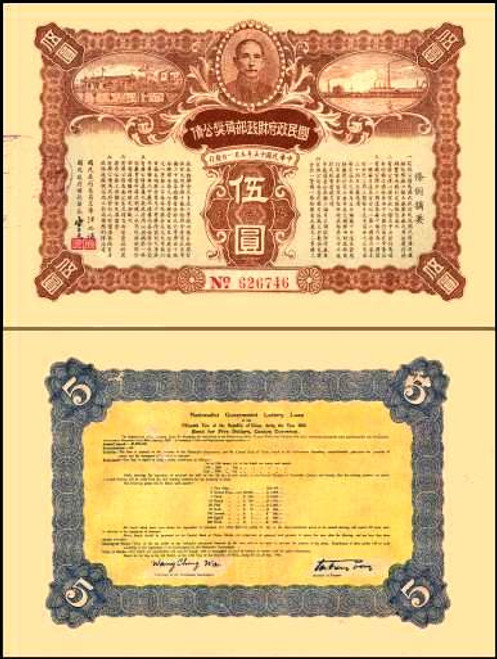 Beautiful certificate from the Second Nationalist Government Lottery Loan of China issued in 1926. This historic document has an ornate border around it with a vignette of Dr. Sun Yat-sen. This item has the printed signatures of the Nationalist Government, Wang Ching Wai and the Minister of Finance. This certificate is over 81 years old. Republic of China The Republic of China (ROC), Asia's first constitutional democracy, was founded on January 1, 1912, by Dr. Sun Yat-sen. During the first two decades of its existence, the ROC suffered from internal turmoil as rival military regimes competed for power. In 1927, the nation was unified after feuding warlords were defeated in the Northern Expedition launched by Generalissimo Chiang Kai-shek. Before long, however, the Japanese invasion of China prompted the Chinese to launch the eight-year War of Resistance against Japan in 1937. Japan was defeated in 1945 with the help of the Allied nations. Despite this victory, the Republic was threatened yet again, this time by the growing power of the Chinese communists, who provoked a civil war and, with the support of the Soviet Union, ultimately gained control of the Chinese mainland, forcing the ROC government to relocate to Taiwan and set up a provisional capital in Taipei. The Republic of China government today exercises de facto control over the island of Taiwan and surrounding island groups, known collectively as the Taiwan area. Areas under the jurisdiction of the ROC government include Taiwan proper, Penghu (the Pescadore Islands), Kinmen (Quemoy), Matsu, and dozens of other small islands. Taiwan is situated in the Pacific Ocean about 160 kilometers (100 miles) off the southeastern coast of the Chinese mainland. Located about midway between Korea and Japan to the north and Hong Kong and the Philippines to the south, Taiwan is a natural gateway for travelers to Asia. Taiwan and the adjacent islands have an area of approximately 36,000 square kilometers (14,000 square miles). The main island of Taiwan, slightly smaller than the Netherlands, is about 394 kilometers (245 miles) long and 144 kilometers (89 miles) at its broadest point. Taiwan is largely mountainous. The Central Range, with a length of 270 kilometers (168 miles) from north to south, and a width of about 80 kilometers (50 miles) near the middle, forms the island's backbone and occupies almost half of its total land area. Other important physiographic divisions include dormant volcanic mountains, foothills, tablelands, terraces, coastal plains and basins. The highest point on Taiwan is Mount Jade, towering 3,952 meters (12,966 feet) above sea level. An estimated 30 percent of the island is arable. Taiwan's climate is subtropical in the north and tropical in the south, with temperatures ranging from about 28 degrees Celsius in July to 14 degrees Celsius in Janurary. Summers, which last from May through September, are usually hot and humid with daytime temperatures from 27 degrees Celsius to 35 degrees Celsius. Winters, from December through February, are short and mild. Snow falls only on the island's higher mountains. Rainfall varies greatly according to season, location, and altitude. The average rainfall is about 2,515 mm per year.