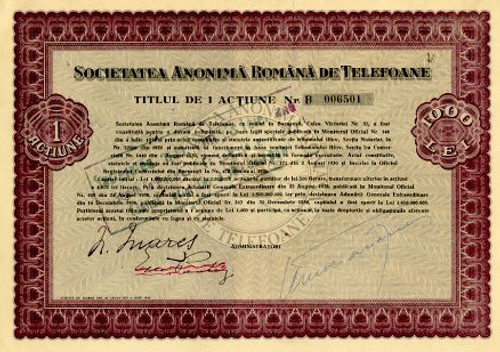 Beautiful engraved Stock certificate from the Romanian Telephone SOCIETATEA ANONIMÃ ROMÃNÃ DE TELEFOANE for 1000 lei. This certificate is decorative with a Guillot border and has 14 of the original 20 coupons attached. This certificate was issued in 1938 and is over 60 years old. It was issued around the beginning of WWII. this certificate has a historical vignette in the center of an old 1930s style telephone. Romania was formed from the unification of Moldavia and Wallachia, 1866. Transylvania, Bessarabia and Bucovina united with Romania in 1918. Support was given to Germany in World War II and the country was occupied by Soviet forces in 1944. The monarchy was abolished and Peoples Republic was declared in 1947.