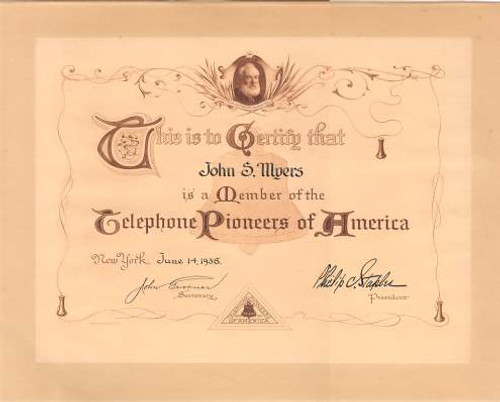 Beautifully engraved certificate from the Telephone Pioneers of America issued in 1938. This historic document has an ornate old telephone border around it with vignettes of Alexander Graham Bell and the association's logo. This item has the signatures of the president and secretary and is over 67 years old. The history of the Telephone Pioneers of America is tied very closely to the science of telephony and the ingenious people who made it happen. The need to communicate gave impetus to Alexander Graham Bell, whose fascination with sound waves and their transmission was bolstered by his concern for those whose hearing was impaired or non-existent. With the able assistance of Thomas Watson and the enthusiastic support of many others, the rest is telephone history. And for the men and women who took part as Bell's discovery blossomed and grew, it was the foundation of an entire industry and the beginning of entire careers. In 1910, Henry W. Pope suggested the industry's growing success warranted more than paychecks and job satisfaction. Many of the people who pioneered the industry and had spent 20 or 30 years together, making things work, indicated they would like to stay in touch. However, Pope wondered, where were all those who had started out in this industry? The question sent both Pope and his office mate, Charles R. Truex, to their desks to compile lists of old friends and co-workers. Thomas Doolittle, already retired, was quick to join the effort, and the notion of the Telephone Pioneers of America was born. Once completed, the list was presented to Theodore N. Vail, then president of AT&T, who concurred in the plans and suggested an annual gathering of the group. This organizing committee drafted a membership paper and personally took it to all of the prominent early telephone people they could reach. There were 169 signatures to that first membership drive. By the spring of 1911 the number had grown to 235 and by October of that year to 439. The first meeting of the fledgling Telephone Pioneers of America convened November 2, 1911, in Boston, where Mr. Bell signed as the first charter member and Mr. Vail, who would serve for nine years, was elected the organization's first president. Membership in the Pioneers was initially limited to those with 21 years of industry service, a standard that stood for 53 years, and fellowship was the order of the day. The service requirement was gradually reduced over time, and today, any employee of one of the organization's sponsor companies can become a member the first day on the job. The focus of the Association has changed as well. In the mid-'50s, Pioneers adopted community service as a core value. Following Mr. Bell's lead, many Pioneer activities centered around putting the skills of the membership to work in meeting the needs of the disabled, particularly the hearing-impaired. More recently, Pioneers have identified a Focus on Education as their primary area of concentration. To supplement Pioneers' efforts in areas where money as well as volunteer service is needed to impact our nations' educational needs, the Pioneers Foundation was established. Today's Telephone Pioneers are committed to serving the communities in which we live and work . . . to maintaining a strong tradition of fellowship among members, employees and their families . . . to a valued heritage of loyalty to the sponsor companies we represent and the industry as a whole. Their credo is "Answering the Call of Those in Need," and Pioneering isn't limited to a few local projects. It's an international effort on the part of thousands of active employees and retirees, our Life Members, to help others with the same kind of dedication and ingenuity members have shown on the job.