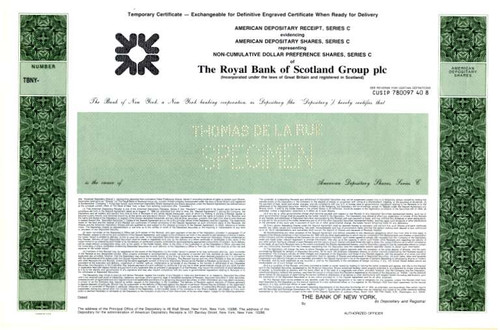 Beautifully engraved ADR certificate from The Royal Bank of Scotland Group plc dated 1992. This historic document was printed by Thomas De La Rue and has an ornate border around it with the company's logo. 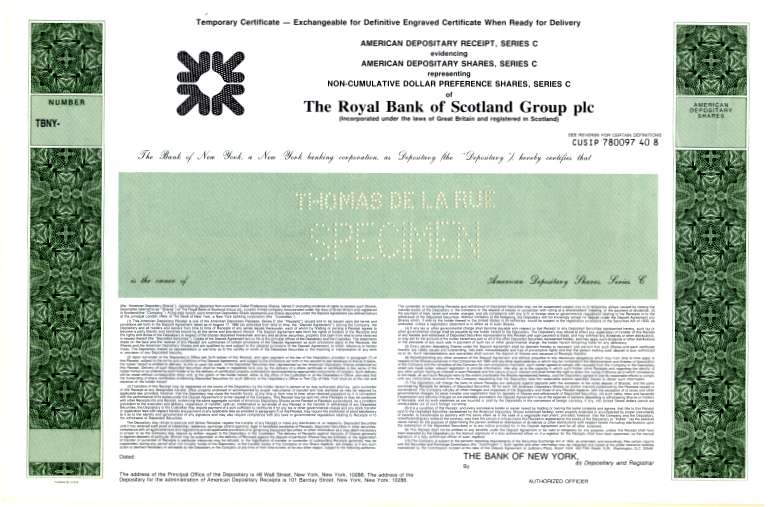 Certificate
The Royal Bank of Scotland Group plc (also known as RBS Group) is a British banking and insurance holding company in which the UK Government (HM Treasury) holds an 82% stake through UK Financial Investments as of 31 March 2012. This stake is held and managed through UK Financial Investments Limited (UKFI), whose voting rights are limited to 75% in order for the bank to retain its listing on the London Stock Exchange. In addition to its primary share listing on the LSE, the company is also listed on the New York Stock Exchange. The group is based in Edinburgh, Scotland. In 2009, after the financial collapse, it was briefly the world's largest company by both assets (£1.9 trillion) and liabilities (£1.8 trillion). The group controls The Royal Bank of Scotland plc, founded in 1727 by a Royal Charter of King George I, the National Westminster Bank, which can trace its lineage back to 1650, and Ulster Bank in Ireland. The registered offices of the group and of the UK clearing bank are located at St Andrew Square, Edinburgh. In 2005, Queen Elizabeth II opened the bank's new head office building in the outskirts of Edinburgh at Gogarburn. The group issues banknotes in Scotland and Northern Ireland and, as of 2012, The Royal Bank of Scotland is the only bank in the UK still to print a £1 note. Before the 2008 collapse and the general financial crisis, RBS Group was very briefly the largest bank in the world and for some time was the second largest bank in the UK and Europe (fifth in stock market value), and the fifth largest in the world by market capitalisation. Subsequently, with a slumping share price and major loss of confidence, the bank fell sharply in the rankings. The Group had a market capitalisation of approximately £12.2 billion as of 23 December 2011, making it only the 32nd largest company on the London Stock Exchange, the bulk of the Group now belonging to the UK government. In 2012, the UK government announced plans to bid for the rest of the RBS shares that it did not own, as it felt that while "while the taxpayer owns over 82pc of the bank following a bailout in 2008, they bear 100pc the bank's huge liability risks". The RBS Group operates a wide variety of banking brands offering personal and business banking, private banking, insurance and corporate finance throughout its operations located in Europe, North America and Asia. In the UK and Republic of Ireland, the main subsidiary companies are: The Royal Bank of Scotland; National Westminster Bank; Ulster Bank; Drummonds; and Coutts & Co. In the United States, it owns Citizens Financial Group, the 8th largest bank in the country. From 2004 to 2009 it was the second largest shareholder in the Bank of China, itself the world's fifth largest bank by market capitalisation in February 2008. Insurance companies include Churchill Insurance, Direct Line, Privilege, and NIG. History from Encyberpedia and OldCompany.com (old stock certificate research service) About Specimens Specimen Certificates are actual certificates that have never been issued. They were usually kept by the printers in their permanent archives as their only example of a particular certificate. Sometimes you will see a hand stamp on the certificate that says "Do not remove from file". Specimens were also used to show prospective clients different types of certificate designs that were available. Specimen certificates are usually much scarcer than issued certificates. In fact, many times they are the only way to get a certificate for a particular company because the issued certificates were redeemed and destroyed. In a few instances, Specimen certificates were made for a company but were never used because a different design was chosen by the company. These certificates are normally stamped "Specimen" or they have small holes spelling the word specimen. Most of the time they don't have a serial number, or they have a serial number of 00000. This is an exciting sector of the hobby that has grown in popularity and realized nice appreciation in value over the past several years.