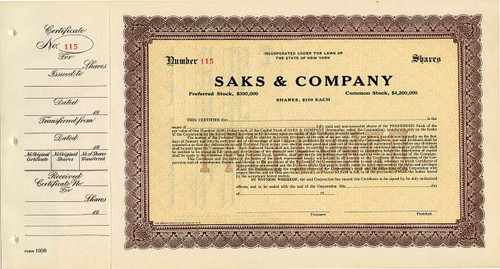 Beautiful unissued 6% Cumulative Preferred Stock Certificate from Saks & Company printed in 1922. This historic document was printed by Broun-Green Banknote Company and has an ornate border around it with the company's name on top center. History from 1924 SAKS & COMPANY (Controlled by Gimbel Brothers, Inc.) History: Incorporated under the laws of New York, Jan. 20, 1902. The company conducts a large specialty store, carrying only wearing apparel for men, women and children, together with such kindred lines as jewelry, leather and toilet goods. Store is located at 34th Street and Broadway, New York. In 1920 company secured a lease on 36,700 eq, ft. of ground on the east side of Fifth Ave. between 49th and 50th Streets, on which a building is under construction estimated to cost $4,250,000. Lease extends for 105 years, being for 21 years with four renewals of 21 years each. Company has deposited with the Central Union Trust Co., of New York, $3,500,000, which amount shall be in- Tested in Government securities or held in banks and trust funds, as a cash fund to be used in construction of the new building. The average number of employees is about 1,500. The entire capital stock of the company was acquired by Gimbel Brothers, Inc., in April, 1923. The 6% Cumulative Preferred Stock was issued in 1922 and was subsequently acquired by Gimbel Brothers, Inc. Management: OFFICERS: Isadore Saks, Pres.; P. A. Conne, Vice-Pres., Lawrence, L. I., N. Y.; Wm. A. Saks, Treas.; A. Saks, Sec.; J. I. Saks, Asst. Treas. DIRECTORS: Isadore Saks, H. A. Saks, Wm. A. Saks, New York; P. A. Conne, Lawrence, L. I., N. Y. ANNUAL MEETING: Third Monday in Feb. OFFICE: 34th Street and Broadway, New York.