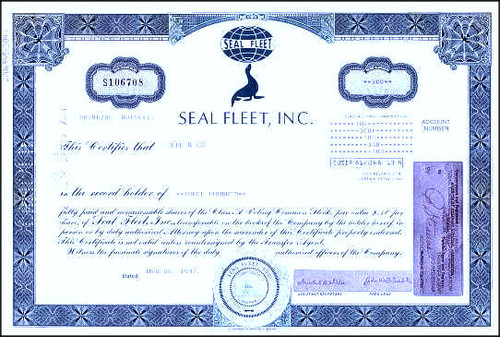 Beautifully engraved certificate from the Seal Fleet, Inc. issued in the 1990's. This historic document was printed by the Jeffries Banknote Company and has an ornate border around it with a vignette of a seal. This item has the printed signatures of the company's president and assitant. Le@P Technology, Inc. and Subsidiaries, formerly known as Seal Holdings Corporation and Subsidiaries, is a holding company focused on the acquisition of, and strategic investments in, companies providing services in health care and life sciences (with particular interest in information technology companies). During 2000, the Company changed its name from Seal Holdings Corporation and Subsidiaries to Le@P Technology, Inc. and Subsidiaries. During 1999, Le@P, as further described below, went through a reverse merger followed by a disposition of the assets acquired through the reverse merger. Accordingly, the December 31, 1999 balance sheet and the statements of operations, cash flows and shareholders' equity presented herein for the year ended December 31, 1999 are those of Le@P, with any balances or transactions which resulted from the reverse merger (and subsequent disposal) shown as a discontinued operation. The December 31, 1998 shareholders' equity balances are those of OH, Inc. ("OHI"), the entity which, for accounting purposes, was the accounting acquirer, even though the Company elected to use the name Le@P Technology, Inc. for periods subsequent to the effective date of the reverse acquisition. Earnings per share for periods prior to the reverse acquisition have been restated to reflect the number of equivalent shares received by the OHI stockholders as a result of the reverse acquisition even though OHI became a wholly-owned subsidiary of Le@P. During March 2000, the Company completed its first investment since the disposal of OHI (as described below), a 21% interest in Healthology, LLC, ("Healthology") a health- media company. At December 31, 2000, such investment was reduced to approximately 15% after Healthology secured additional equity financing in August 2000. However, on February 5, 2001, Le@P purchased an additional 800,000 shares of Healthology common stock, which increased Le@P's interest to approximately 18%. The Company also has a 6% interest in Camber Companies LLC, ("Camber"), a company specializing in multidisciplinary, musculoskeletal care. Reverse Acquisition Effective on April 2, 1999, Le@P (which for periods prior to April 2, 1999 is referred to herein as the "Acquiree") and OHI, whose primary operating assets consisted of a comprehensive outpatient diagnostic and surgery center (the "Oakridge Center"), entered into an Agreement and Plan of Exchange whereby 1,000 shares of OHI Common Stock (which represented 100% of OHI's outstanding Common Stock) was exchanged for 10,318,419 shares of the Acquiree's common stock and 2,000,000 shares of the Acquiree's convertible preferred stock, which was equal to 91% of the outstanding common stock of the Acquiree on a fully diluted basis (including outstanding options to purchase Acquiree shares) on that date. Accordingly, the acquisition has been treated for financial reporting purposes as a reverse acquisition, with OHI (the "Acquirer") as the accounting acquirer. As a result of the aforementioned transaction, the number of Class A Common Shares authorized to be issued by the Acquiree was increased from 14,975,000 to 99,975,000. The net assets received from the Acquiree in the reverse acquisition were recorded at their fair value of $1,784,374, less acquisition costs of $115,500. The Acquirer also received 1,408,325 shares of Acquiree Class A and Class B Common Stock. The results of the Acquiree's operations are included in the Company's consolidated statements of operations from the effective date of the reverse acquisition. Discontinued Operations On September 30, 1999, Le@P sold its wholly-owned subsidiary, OH, Inc., which includes the Oakridge Center, to an investor group comprised of certain members of OHI's management (the "Oakridge Group"). The Oakridge Center constituted the only active business operation of the Company during 1999. The Company has no ownership interest in the Oakridge Group. The Company's primary consideration was the assumption by the Oakridge Group of all of OHI's liabilities. The Oakridge Group has assumed these liabilities without any recourse to the Company and the Company has not guaranteed any portion of the liabilities assumed by the Oakridge Group. As a result, Le@P recorded a gain of $1,170,115, which was equal to the equity deficiency of OHI on the date of disposition. The activities of OHI prior to October 1, 1999 are shown as discontinued operations in the accompanying financial statements. Revenue from discontinued operations was $6,446,000 for the year ended December 31, 1999, and is included as part of the loss from discontinued operations in the accompanying consolidated statements of operations. Leap Technology Inc was organized in March 1997 under the laws of the State of Delaware and is the successor Corporation to Seal Fleet, Inc. Le@P Technology, Inc.'s ("Le@P" or the "Company") operating strategy is to acquire or make strategic investments in companies that provide products or services in the healthcare and life sciences industries, with particular interest in information technology companies. The Company's operating strategy has evolved to place less emphasis on Internet and business-to-business ("B2B") e-commerce companies, while retaining a focus on companies in the healthcare and life-sciences industries with product, service, or information technology capabilities. The Company intends to utilize the substantial healthcare skills, experience and industry contacts of its management and Board of Directors in the development of a network of investment and acquisition candidates (referred to herein as "Partner Companies"). Le@P further intends to foster innovation and growth among its Partner Companies by providing the opportunity for the exchange of ideas among those companies and encouraging collaborative ventures among them. The background information is from the company's SEC filings.