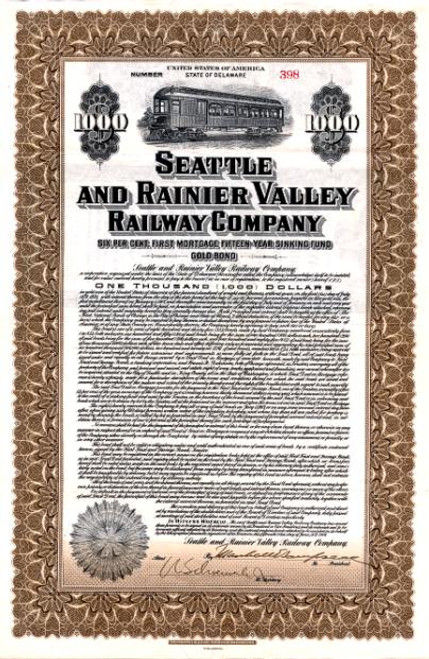 Beautifully engraved $1,000 Gold Bond certificate from the Seattle and Rainier Valley Railway Company issued in 1916. This historic document was printed by the American Banknote Company and has an ornate border around it with a vignette of a railway car. This item is hand signed by the Company's President and Secretary and is over 90 years old. This is first time we have seen the $1,000 bond from this company.

Certificate Vignette
The Seattle and Rainier Valley Railroad ran from downtown Seattle to Renton. For many years, this streetcar line was the main means of transportation between the city and the southern towns. In 1913, the rail line pleased baseball fans by offering special cars to Dugdale Field. Rainier Valley's First Light Rail Transit System As Sound Transit and Southeast Seattle residents debate the best routes for the new "Link" light rail line, it's useful to remember that Rainier Avenue and its neighborhoods were effectively created a century ago by one of King County's first streetcar and interurban rail systems. The First Interurban Beginning in the late 1800s, the City of Seattle promoted the development of streetcar lines by awarding franchises and street-use permits to private developers. Frank Osgood built the city's first line in 1884 and shuttled passengers up and down 2nd Avenue on horse-drawn streetcars. Three years later, J.M. Thompson constructed a cable car line between Pioneer Square and the distant "suburb" of Leschi, on the west shore of Lake Washington. Leschi, then undeveloped, is now firmly entrenched as a Seattle neighborhood. Frank Osgood retired his "hayburners" in 1889 and began using electricity to drive his expanding streetcar system. Other developers followed suit and Seattle was soon crisscrossed by a tangle of privately owned electric streetcar and cable car lines. Amid this period of entrepreneurial enthusiasm, J. K. Edmiston undertook development of the County's first "interurban" railroad to link Seattle with cities to the south. Seattle issued a franchise for the new Rainier Avenue Electric Railway on July 21, 1891. Edmiston built his line up Washington Street to 14th Avenue S, then to Jackson Street and south along the route of today's Rainier Avenue. Historian Leslie Blanchard describes Rainier Valley as an "almost uninhabited wilderness" at the time and credits the Rainier Avenue Electric Railway for spurring the area's development. The line also hauled as much produce as it did passengers, linking Rainier Valley farmers with downtown Seattle shoppers. Soon after service began, Edmiston lost control of the railway to W. J. Grambs, who extended it to Columbia City and then to Rainier Beach. The aforementioned Frank Osgood took over in 1895 and one year later, pushed the rails south to Renton, creating King County's first true interurban rail transit service, which was renamed the Seattle Renton & Southern Railway (SR&S). Derailments Osgood sold the SR&S to W. R. Crawford in 1907. Crawford introduced the region's first true interurban railway cars -- self-propelled electric railroad cars considerably larger than conventional streetcars -- which residents dubbed "Bull Moose." The SR&S remained independent after 1900, when the owners of the Seattle Electric Company consolidated control of most of Seattle's streetcar system and later began development of new interurban lines to Tacoma and Everett. Although a busy and vital transit conduit, the SR&S suffered from an assortment of travails. Chronic mismanagement led to one of the region's worst transit accidents in 1909. Later, an attempt to impose zoned fares sparked a passenger riot. On March 7, 1911, disgruntled Seattle voters approved an $800,000 bond to purchase the SR&S and put it under municipal management. The line's owners immediately raised their asking price to $1.2 million, which the City refused to pay. The bond funds were diverted in 1914 to create a city-owned streetcar line to Ballard, and Seattle took over operation of all remaining streetcar lines in 1919 -- except for the SR&S. End of the Line The SR&S declared bankruptcy in 1912 and was reorganized as the Seattle & Rainier Valley (S&RV) Railway, but service did not improve with the new name. The S&RV stubbornly refused to allow the City to pave Rainier Avenue between its tracks -- creating what residents called a "thoroughfare of death" as drivers and pedestrians tried to cross the central streetcar rails. The City Council retaliated by refusing to renew the line's franchise in 1934. Two years later, the City ordered the S&RV to rip up its lines so Rainier Avenue could be widened and resurfaced for automobiles. The last Rainier Avenue interurban car finished its run at 1:45 a.m., January 1, 1937, and City buses took over the route. By early 1941, the rest of Seattle's interurbans and streetcars would share the same fate. By Walt Crowley, February 24, 1999 at Historylink.org -------------------------------------------------------------------------------- Sources Leslie Blanchard, The Street Railway Era in Seattle: A Chronicle of Six Decades (Forty Fort, PA: Harold E. Cox, 1968; Walt Crowley, Routes, A Brief History of Public Transportation in Metropolitan Seattle (Seattle: Metro Transit, 1993).