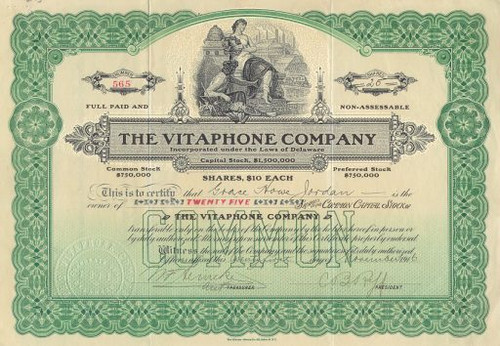 Beautifully engraved certificate from the Vitaphone Company issued in 1916. The company was incorporated in 1911. This historic document was printed by the Broun-Green Company and has an ornate border around it with a vignette of and allegorical man and woman sitting in fron of a factory. This item is hand signed by the company's president, C. B. Repp and assistant treasurer and is over 84 years old. The certificate was folded in thirds and shows some slight seperation at the seams. In 1912 with the expiration of the Berliner patent freed a small company, Vitaphone, from the terms of an injunction and allowed it to manufacture machines. Vitaphone was started by Clinton Repp, a longtime phonograph man. Repp had been the Cuban salesman for an earlier, unrelated Vitaphone company, and when he discovered that the name had not been trademarked he liked it so much that he appropriated it for himself. Vitaphone's wooden arm. Repp invented perhaps the oddest reproducer of the era, a long vibrating wooden arm attached by a silk linkage to a stationary diaphram, touted as "the non-metallic reproduction of sound." In November 1912 a catalogue was issued showing six styles of Vitaphones priced from $15 to $185, manufactured at the Vitaphone factory in Plainfield, New Jersey. Vitaphone was undoubtedly undercapitalized. It tried to cut costs by opening an in-house cabinet factory in Newburgh, New York, but when the deal fell apart it was sued around June, 1914 by the head of the Newburgh chamber of commerce, who had bought stock in the venture. By this time Vitaphone production was very slow.