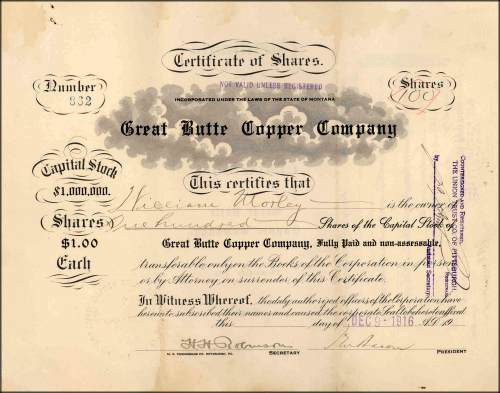 Beautifully engraved certificate from the Great Butte Copper Company issued in 1916. This historic document has an ornate border around it. This item is hand signed by the Company's President (F. W. Bacorn) and Secretary (H. H. Robinson) and is over 85 years old. This company took over the property of the Butte & Supervisor Mine and they are the successor to the Butte and Bacorn Copper Company. They had 23 patented claims and held the options for the Calumet, Moonlight and Jasper Lode Claims. The Georgetown mining district is a hard to define collection of mining districts centered around Cable Mountain along the western edge of the Flint Creek Range. These mining districts include a small Georgetown sub-district immediately north of Georgetown Lake, the Southern Cross mines, and the Cable mines. The district has also been defined to include several other districts such as the Hidden Lake and Red Lion to the north, and the Gold Coin to the southeast. These later districts are discussed separately or, in the case of the Gold Coin, as a sub-district of the Silver Lake district. The district is underlain by faulted and folded Paleozoic sedimentary rocks. Just east of Georgetown the sedimentary rocks have been cut by intrusive granites which occupy several square miles. Small apophyses and dike-like masses occur in the surrounding areas. The most important mines are in the sedimentary rocks near the granite contacts with occasional mineralization both in the sedimentary rocks up to a mile from the granite and within the granite itself. The most important deposits include gold-copper replacements of contact origin, gold-bearing replacement veins in sedimentary rock, gold-bearing veins in granite, silver-bearing replacement deposits in calcareous rocks, and contact deposits of magnetic iron ore. Placers are also an important source of gold in the area (Sahinen 1935). Beginning around 1902, lessees F. W. and H. C. Bacorn extensively prospected the property utilizing diamond drills and pumping out flooded levels. The brothers managed to recover $18,000 in the process. In 1904 a body of high grade ore was discovered within a few feet of the west drift on the 200 foot level. By 1906 three shifts were run in the mine. As the Cable Lease Mining Company the Bacorns eventually gained ownership of the property. From its discovery to 1911, the Cable mine is estimated to have produced between three and four million dollars of ore. In 1934 a number of men were employed at the mine in general clean up and repairs (Lincoln 1911b; Gilbert 1935b; DeMunck 1956; Wolle 1963; Munson 1988).