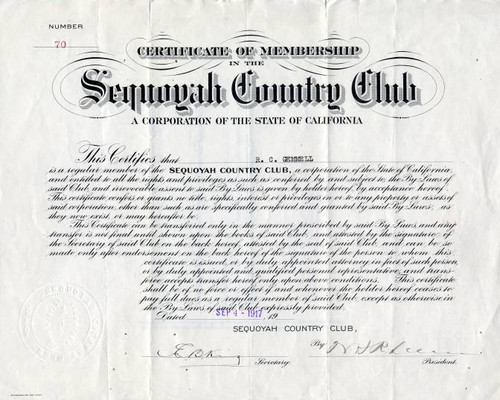 Beautiful RARE Certificate of membership from the Sequoyah Country Club issued in 1917. This historic document was printed by the Schwabacher-Frey Staty Company and has an ornate vignette of the clubs name. This item has the original signatures of the Company's President, William S. Rheem and Secretary, and is over 95 years old.

Certificate Vignette
The Sequoyah Country Club was organized on October 3, 1913. The first organizational meeting show many prominent citizens elected to the first board of directors, including P. J. Clay and Fred R. Sherman, co-owners of Sherman/Clay company, and Col. W. S. Rheem, president of Standard Oil. The Sequoyah Country Club is located high in the Oakland hills where there are spectacular views of San Francisco Bay. It is one of the best golf and social clubs in the Bay Area. The course's tree-lined fairways, picturesque views and challenging greens made Sequoyah a PGA tour stop in the 1930s and 1940s, attracting legends such as Babe Didrikson Zaharias, Sam Snead, Ben Hogan, Byron Nelson and Jimmy Demaret. Sequoyah hosted the PGA Tour Oakland Open for many years. William S. Rheem (1862 April 19, 1919), aka W.S. Rheem, was an important civic figure in the politics of early Richmond, California in addition to being president of Standard Oil. Rheem arrived in Richmond after finding a spot for a new refinery to replace an existing and unexpandable location in Alameda.[2] He picked a spot in the Point Richmond District along the Potrero Hills and the Marshlands. A colossal facility was built at this site employing thousands of employees and drastically transforming a farming community of a few hundred into a company town of several thousand. As the installations where completed William Rheem remained with the company as the superintendent of the Richmond Refinery. Rheem Creek a small river in the Hilltop District and Rheem Avenue a street in the Central Richmond District are named in his honor. He died of a heart attack en route to Santa Cruz in a restaurant during a family road trip and outing. History from Wikipedia and OldCompany.com (old stock certificate research service)