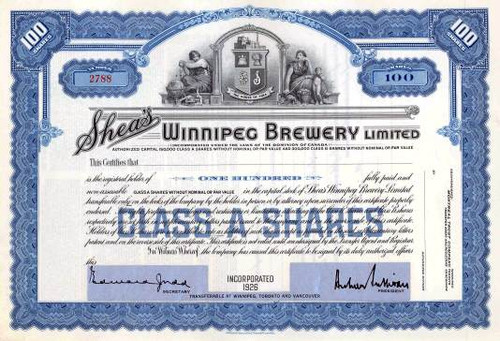 Beautifully engraved unissued certificate from the Shea's Winnipeg Brewery Limited. This historic document was printed by the Canadian Banknote Company in the 1920's and has an ornate border around it with a vignette of the company logo between two allegorical women. It has the printed signature of the company's president, Arthur (Colonel) Sullivan.

Certificate Vignette
Arthur (Colonel) Sullivan Born in Charlottetown, P.E.I. in 1880, Arthur Sullivan, another prominent lawyer and businessman, served in the First World War with the 43rd Battalion, Queen's Own Cameron Highlanders, as Lieutenant-Colonel. A senior partner in the law firm Sullivan and Turner, Chairman of the Board of Shea's Winnipeg Brewery (now owned by Labatt's) and a Director of John Labatt Ltd.