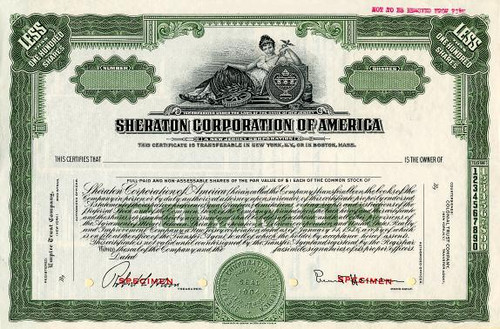 Beautiful engraved Rare Specimen certificate from the Sheraton Corporation of America printed in 1947. This historic document was printed by Hamilton Bank Note Company and has an ornate border around it with a vignette of an allegorical woman. This item has the printed signatures of the Company's President and Treasurer, Robert L. Moore. 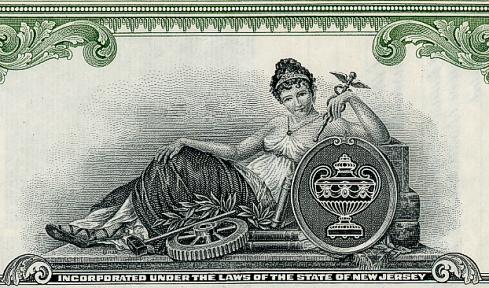 Certificate Vignette
Sheraton began in 1937 when two entrepreneurs, Ernest Henderson and Robert Moore, acquired the Stonehaven Hotel in Springfield, Massachusetts. They soon expanded their holdings to include properties from across the United States. In 1945, it was the first hotel chain to be listed on the New York Stock Exchange. Sheraton expanded internationally in 1949 with the purchase of two Canadian hotel chains. The 1960s saw the first Sheraton hotels in Latin America and the Middle East. In 1965, Sheraton opened its 100th hotel. The multinational conglomerate ITT purchased the chain in 1968, after which it was known as ITT Sheraton. In 1998, Sheraton and its sister brands Four Points by Sheraton, St. Regis, and The Luxury Collection were acquired by Starwood. Sheraton Hotels and Resorts is Starwood Hotels & Resorts' largest and second oldest brand (Westin being the oldest). Starwood's headquarters are in White Plains, New York. History from Wikipedia and OldCompanyResearch.com. About Specimens Specimen Certificates are actual certificates that have never been issued. They were usually kept by the printers in their permanent archives as their only example of a particular certificate. Sometimes you will see a hand stamp on the certificate that says "Do not remove from file". Specimens were also used to show prospective clients different types of certificate designs that were available. Specimen certificates are usually much scarcer than issued certificates. In fact, many times they are the only way to get a certificate for a particular company because the issued certificates were redeemed and destroyed. In a few instances, Specimen certificates we made for a company but were never used because a different design was chosen by the company. These certificates are normally stamped "Specimen" or they have small holes spelling the word specimen. Most of the time they don't have a serial number, or they have a serial number of 00000. This is an exciting sector of the hobby that grown in popularity over the past several years.