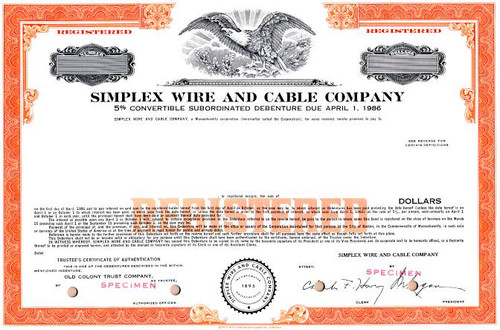 Beautifully engraved specimen certificate from the Simplex Wire and Cable Company. This historic document was printed by the Security-Columbian Banknote Company and has an ornate border around it with a vignette of an eagle. This item has the printed signatures of the Company's President, and Clerk.

Certificate Vignette
The Simplex Wire & Cable Company had its beginnings in 1865 with the formation of a partnership between Charles A. Morss, who had his own wire making firm in Boston, and Oliver Whyte, to manufacture wire products. They made their first insulated wire in 1885 as an experiment. Following a fire in 1888 the company moved to new premises in Cambridge, Mass. In 1890 Morss and Whyte took over the Simplex Electric Company who had been acting as selling agents for them. They merged the two firms in 1895 under the Simplex name. This company was to concentrate on the manufacture of insulated wire and cable. One of the first submarine cables they made was a five mile telephone cable which was laid across the Straits of Mackinac in Lake Michigan; another, this time one mile in length, was laid across Boston Harbour. Both were laid in 1900. Problems in obtaining gutta percha for insulation forced the company to use rubber insulation, which only lasted for a few years due to proteins in the rubber absorbing moisture. To get over this they used lead sheathing on some cables. By 1926 they had developed a protein free rubber which they used for power and telephone cables. The first submarine cable using the new product was made in 1933 for the US Coast Guard and laid between Florida and the Fowey Rocks Light. The success of this cable led to many similar contracts. During World War II they produced over 3000 miles of cable for the US Army Signals Corps Alaskan Communication System as well as cable for harbour and coastal defence work. Bell Telephone Laboratories restarted their research on telephone cables after the end of World War II and Simplex was invited to join in on cable and repeater housing development. In 1948 Simplex manufactured 20 nm of coaxial cable which with six repeaters was laid by CS Lord Kelvin in the Bahamas. The first commercial system using the new cable was laid between Key West and Havana in 1950 using twin "go" and "return" cables. Twin cables were also used on the Atlantic Missile Range System installed in 1953 by HMTS Monarch (4); repeaters for this cable were installed on land. On the 26th November 1953 the company opened a new factory on the banks of the Piscataqua River at Newington, New Hampshire solely for the manufacture of cables, both power and telephone. Some other cables manufactured by the Company: 1952-4 Florida - Puerto Rico. For the USAF 1956 Port Angeles - Ketchikan 1250 nm of cable and 36 repeater housings 1956 TAT 1 350 nm shore end cable and 58 repeater repeater housings 1957 HAW 1 2380 nm of cable and 98 repeater housings. 1957 Cape Dyer - Thule 1450 nm of cable and 30 repeater housings. For the USAF 1959 TAT 2 600 nm of cable and 114 repeater housings. 1960 Florida - Puerto Rico 1200 nm of cable and 38 repeater housings. 1961 Cape Dyer - White Bay 2050 nm of cable and 45 repeater housings. For the USAF 1962 Creole Petroleum - Lake Maracaibo, Venezuela 22 nm of 35 kV single phase power cable. 1963 Puerto Rico - Viques Island 10 nm of 35 kV 3 phase power cable. 1964 Wet Wash A: Philippines - Vietnam 696 nm of cable. 1966 Wet Wash C: Hawaii - Johnston Island 769 nm of cable. 1966 Gulf Coast Telephone Co 150 nm of cable. 1967 Vietnam coastal system 961 nm of cable. For the USAF 1967 Vietnam - Thailand 607 nm of cable. For the USAF 1967 Chugach Electric - Cook Inlet, Alaska 14 nm of 138 kV power cable. 1968 Union Oil - Santa Barbara Channel, California 66 nm of power and signal cable. 1968 Bonneville Power - Puget Sound, Washington 69 nm of power cable. 1971 Taiwan - Okinawa 363 nm of cable. 1973. Mt. Dessert Island - Swans Island, Maine 5¼ nm of power cable. 1976. TAT 6 shore ends. 1993 HAW 5 San Luis Obispo, California - Keawaula, Hawaii. With AT&T SSI Many cables were also produced for United States defence systems, including work for the United States Naval Electronic Systems Command. In addition many submarine power cables have been manufactured by the company. In 1974 the company was taken over by Tyco. History from Encyberpedia and OldCompany.com (old stock certificate research service) About Specimen Certificates Specimen Certificates are actual certificates that have never been issued. They were usually kept by the printers in their permanent archives as their only example of a particular certificate. Sometimes you will see a hand stamp on the certificate that says "Do not remove from file". Specimens were also used to show prospective clients different types of certificate designs that were available. Specimen certificates are usually much scarcer than issued certificates. In fact, many times they are the only way to get a certificate for a particular company because the issued certificates were redeemed and destroyed. In a few instances, Specimen certificates were made for a company but were never used because a different design was chosen by the company. These certificates are normally stamped "Specimen" or they have small holes spelling the word specimen. Most of the time they don't have a serial number, or they have a serial number of 00000. This is an exciting sector of the hobby that has grown in popularity over the past several years.