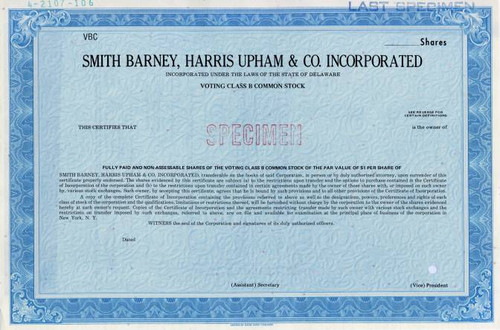 Beautiful specimen certificate from the Smith Barney, Harris Upham & Co., Inc.. This historic document was printed by the American Bank Note Company and has an ornate border around it with a vignette of the company name. 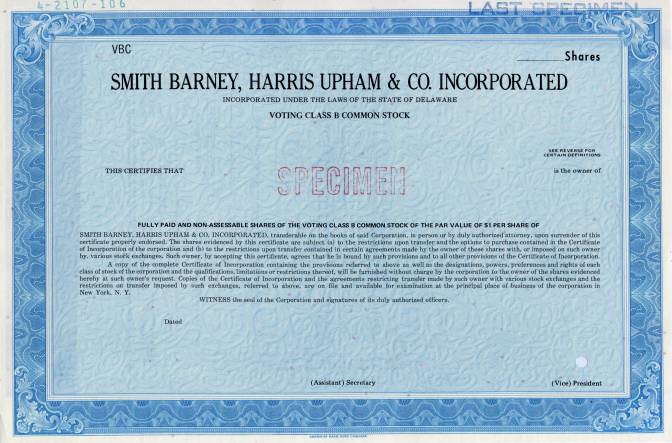 Certificate
Smith Barney also known as Morgan Stanley Smith Barney was a division of Citigroup Global Capital Markets Inc. On January 13, 2009, Morgan Stanley and Citigroup announced that Citigroup would sell 51% of Smith Barney to Morgan Stanley, creating Morgan Stanley Smith Barney. The combined brokerage house has about 18,500 brokers and manages $1.7 trillion in client assets. Clients range from individual investors to small- and mid-sized businesses, as well as large corporations, non-profit organizations and family foundations. Smith Barney & Co. was formed in 1938 through the merger of Charles D. Barney & Co., founded in 1873, and Edward B. Smith & Co., founded in 1892. In 1975 Smith Barney merged with Harris, Upham & Co. to form Smith Barney, Harris Upham & Co., which, in 1977, was placed under SBHU Holdings, a holding company. In 1982, SBHU Holdings was renamed Smith Barney Inc. In the late 1980s the retail brokerage firm Smith Barney was owned by Primerica Financial Services. Commercial Credit purchased Primerica in 1988, for $1.5 billion. In 1992, they paid $722 million to buy a 27 percent share of Travelers Insurance. By the end of 1993, the merged company was known as Travelers Group Inc. In September 1997, Travelers acquired Salomon Inc. (parent company of Salomon Brothers Inc.), for over $9 billion in stock, and merged it with its own investment arm to create Salomon Smith Barney. In April 1998 Travelers Group announced an agreement to undertake a $76 billion merger between Travelers and Citicorp, creating the largest single financial services company in the world. It now has over one trillion U.S. dollars in assets. On January 13, 2009, Morgan Stanley and Citigroup announced the merger of Smith Barney with Morgan Stanley's Global Wealth Management Group, with Morgan Stanley paying US$2.7 billion cash upfront to Citigroup for a 51 percent stake in the joint venture. The joint venture operates under the name Morgan Stanley Smith Barney. On June 1, 2009 Morgan Stanley and Citigroup Inc. announced they closed early on the launch of their joint venture that combines Morgan Stanley's wealth management unit with Citi's Smith Barney brokerage division. The new venture, called Morgan Stanley Smith Barney, was supposed to launch during the third quarter. The combined entity generates about $14 billion in net revenue, has 18,500 financial advisers, 1,000 locations worldwide and service about 6.8 million households. History from Wikipedia and OldCompany.com (old stock certificate research service). About Specimen Certificates Specimen Certificates are actual certificates that have never been issued. They were usually kept by the printers in their permanent archives as their only example of a particular certificate. Sometimes you will see a hand stamp on the certificate that says "Do not remove from file". Specimens were also used to show prospective clients different types of certificate designs that were available. Specimen certificates are usually much scarcer than issued certificates. In fact, many times they are the only way to get a certificate for a particular company because the issued certificates were redeemed and destroyed. In a few instances, Specimen certificates were made for a company but were never used because a different design was chosen by the company. These certificates are normally stamped "Specimen" or they have small holes spelling the word specimen. Most of the time they don't have a serial number, or they have a serial number of 00000. This is an exciting sector of the hobby that has grown in popularity over the past several years.