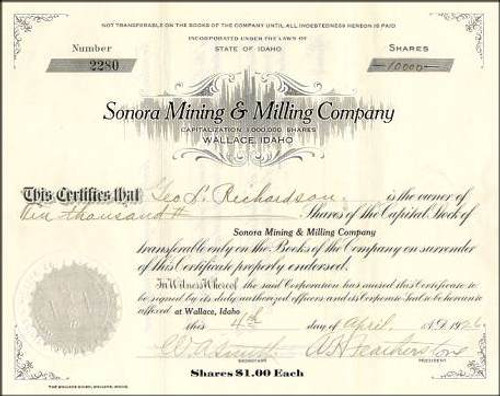 Old Mining Stock Certificate from the Sonora Mining and Milling Company issued in the 1921. This historic document has an ornate corner border around it with a vignette of the company's name. This item is hand signed by the company's president and is over 84 years old. The Sonora Mining and Milling Company was incorporated November 9, 1897, by J.E. Argi, Samuel Drappin, Allen E. Gill, John Moffatt, Dan Cardoner, Herman J. Rossi, and W.C. Clark. There were 1,000,000 shares of capital stock at a par value of $1.00. In 1923 the lode claims, located in the Lelande district, near Burke, Idaho were: Alameda, Sonora, First Chance, New Hope, Mayflower, Sonora Fraction, First Chance Fraction, Lexington, Center Rock, Big Seven, North Star, Justin, St. Paul, and Aronos. Six of these were patented. Another claim, the Hoover, was located July 15, 1928. By 1933 there were 11 patented and 4 unpatented claims. Development work, financed by stock assessments, consisted of four tunnels, the principal one being 5900 feet long. By the time the mine was sold in 1943 the tunnel was 6210 feet. Membership on the board of directors changed frequently, but the chief activity of board meetings, levying assessments, remained constant. There were fifty-nine assessments during the life of the company. When the board levied assessment #59, on June 10, 1939 the treasury had $1.20, and the company was indebted $59.70 for advertising and taxes. In the fall of 1943 the King Mining Company, headed by Henry L. Day, proposed a buy out of Sonora. The directors, C.H. Swanson, Eugene Roher, George L. Richardson, Stella L. Richardson, Otto Olson, Joe Battick and Charles Olson discussed and approved the proposition. On October 15, 1943 the stockholders of the company approved the deeding of the property to King Mining Company.