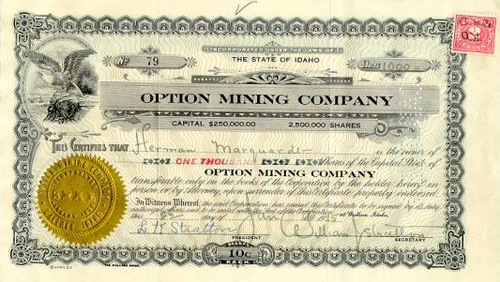 Beautifully engraved Certificate from the famous Option Mining Company issued no later than 1926. This historic document has an ornate border around it with a vignette of an eagle on a cliff. This item is hand signed by the company's officers, Lorena K. Stratton, William J. Stratton and is over 77 years old. The Option Mining Company was formed from the Stratton and Stratton Option Project "C" in 1925. The property consisted of the Ohio and Pacific lode claims, an area of 33.763 acres, located in the Placer Center Mining District, Shoshone County, Idaho. The capitalization was 2,500,000 shares with a par value of 10 cents per share. Present at the first meeting of subscribers on January 31, 1925, were Lorena K. Stratton, William J. Stratton, and Merton E. Fisher. Money to finance development and pay the salaries of the officers was raised through stock assessments, the first of which was a 1 cent per share assessment levied in February 1926. In August 1928, the stockholders petitioned for a special meeting, none having been held since the first meeting in January 1925. The meeting was held October 2, and new directors, W.B. Heitfeld, A.E. Lawson, and P.T. McGuigan, were elected; the office was also moved to the Day Building. On October 3 Heitfeld informed the other directors he had found the records of the corporation "pretty well muddled up" and the salaries previously paid to the officers were discontinued. An audit of the books revealed irregularities in both the stock and financial records. On February 28, 1929 the Strattons offered to pay Option $3575.00 in cash, replace 70,660 shares of stock in the treasury, and reconstruct 1500 feet of track in the Ohio and Pacific lode tunnel in complete settlement for all errors and irregularities done or perpetrated by W.J. Stratton while secretary of Option. In 1926 the company drove a tunnel practically crosscutting the Ohio and Pacific lodes but found neither ore nor vein. This tunnel penetrated some distance into the Dora claim of Dayrock and Option was enjoined from further trespass into Dayrock territory. In 1927 Option leased the Ohio claim to Dayrock which ran a tunnel from the 200 foot level of its mine across the Ohio lode. Low grade ore was discovered but it was not profitable to extract the mineral under lease, nor would it warrant a separate mining operation by Option. On July 7, 1930 Dayrock, which owned 2/3 of the Option stock offered to purchase Option for 36,0OO shares of Dayrock stock or $72,000. At a stockholders meeting held August 12, 1930 a resolution was passed by a majority of the minority stockholders accepting the stock offer. Henry L. Day then voted the Dayrock shares in accordance with their wishes. On October 15, 1930 the stockholders of the Option Mining Company voted to dissolve the corporation and a Decree of Disincorporation was entered in the District Court of Shoshone County on November 22. The assets of the company were distributed to stockholders upon the return of stock certificates.