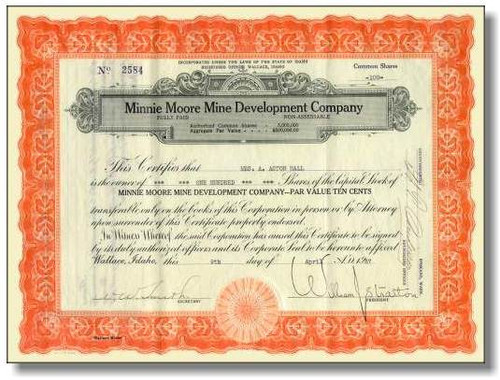 Beautifully engraved certificate from the Minnie Moore Mine Development Company issued in 1936-1939. This historic document has an ornate border around it. This item is hand signed by the company's president and secretary and is over 67 years old. Mining in the Wood River Valley Early discoveries of mineralized quartz veins west of Hailey occurred in the 1860s, but Indian opposition culminating in the Bannock War of 1878 slowed development. Idaho miners concentrated their efforts farther west near Idaho City. By 1880, however, new technology for refining lead-silver ore had been developed, and the rush to the Wood River mines came with thousands of fortune hunters. The Oregon Short Line, financed by Jay Gould, followed the miners in 1882-1883, and the area boomed. Lead-silver mines became the staple of Idaho's mining economy and in the 1890s, Idaho politicians were solidly behind the doomed silver standard for the U.S. currency. The first discoveries in the Wood River area were in May 1879, when David Ketchum found a few small lead-silver prospects near Galena Summit. The Queen of the Hills west of Bellevue was discovered in July of that year. Ketchum, Bellevue, and Hailey were settled in 1880. Smelters were built in Hailey and Ketchum in 1881, and Idaho's first electric light system and one of Idaho's first telephone systems were installed in Hailey in 1882. Investor capital poured into the area from St. Louis and Philadelphia. A branch of the Oregon Short Line reached Hailey in 1883 and Ketchum in 1884. Production from the Wood River mines was over $2 million a year from 1885 to 1887. But the price of silver was falling and labor troubles developed. The output decreased sharply in 1888 and nearly stopped in 1892, with the collapse of the price of silver. Ketchum was nearly abandoned. Mining was by no means finished as the Triumph mine southeast of Ketchum produced about $28 million between 1936 and 1957. Now in 1993, it is an Environmental protection agency "Super Fund Site." Ore was brought down from the mine to the Ketchum branch of the Union Pacific on an overhead tramway to Zinc Spur siding near present-day Ketchum. The Minnie Moore Mine is still active use. The entire production of the Wood River mines is over $62 million.